That could be the whole blog for today. The weather channel forecast wind all day, with gusts up to 40 MPH. I don't know if the gusts got that strong, but we sure did get lots of wind today. It was only a 35 mile ride, but the wind made for slow going.

Most of us stopped for lunch at a cafe by the Marina in Presto, glad to get indoors and out of the wind. The wind, however, did not take a break and had increased in intensity by the time we resumed our ride.

The weather forecast also called for rain, and we were concerned after lunch that we might get rained on before reaching the hotel. About three miles from the hotel we reached a major intersection where there was no discernible arrow marking our route. We later learned that a passing shower had obliterated the arrows. After a phone call and some detective work with Google Maps, we got back on the correct path. Our group of about eight people arrived at the hotel less than a minute before the rain started. A few of those behind us were not so lucky.

Last night's dinner was a buffet in our hotel (in which we appeared to be the only guests). There must have been at least half a dozen dishes featuring spinach, which seem odd. This morning we cycled past field after field planted with spinach -- it all made sense.

As I type this, I see that it is raining very heavily outside. We are lucky to be inside, nice and dry.

In about half an hour, we will have a tasting of local craft beers, followed by dinner at a restaurant across the street from the hotel.

I have been surprised by the number of homes and farm buildings with thatched roofs, which you can see in one of the attached photos. 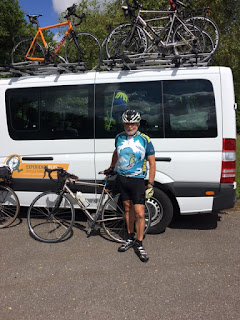 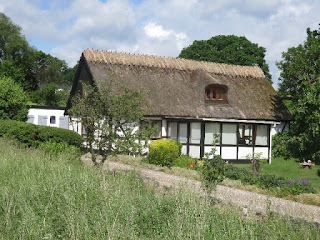 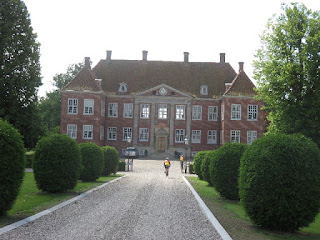