What a delight to be in a modern hotel room with super fast WiFi. But I am getting ahead of the story.

We left Lubeck this morning with a less than promising weather forecast. Wind and rain. We did have the wind (pretty strong at times) but avoided the rain, although we did see some wet spots where scattered storms had preceded us.

The ride was mostly along small country roads and bike paths with nothing of significant note, except for a small antique/curio/tea restaurant.  It was very English in atmosphere, with a variety of teas, coffees, scones and other pastries to satisfy hungry cyclists. I had carrot cake with my coffee (I must confess that I have had better -- this was rather dry.) 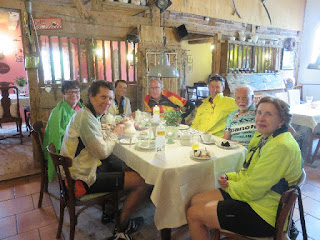 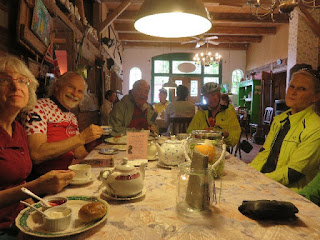 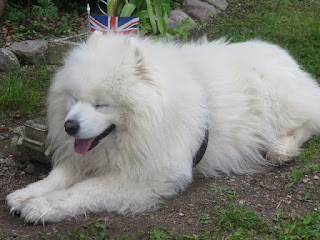 Because of the impending rain in the forecast, it was suggested that we not linger over lunch, and most of us just kept pedaling. As we approached Hamburg, several of us caught up with Philipp who was marking out course with the chalk arrows.  We stopped for coffee to let him get ahead of us again and finish the route marking.

We rode into Hamburg, passing through a large Middle Eastern market district with Halal meat markets, lots of fresh produce, kebab stalls, hookah shops, etc. It was rather interesting. This was the first major ethnic neighborhood (other than Danish or German :) ) that I have seen on this trip.

We arrived at our hotel. It is the nicest of the hotels so far, and we will be here for two nights. Tomorrow is a non-cycling day. (We have done about 230 miles so far.) Instead, we will have a harbor tour by by boat and then free time to explore the city of Hamburg.

We were joined by two new riders this afternoon who will be with us for the second week. Peter and Patty -- Peter is a fellow graduate of Georgetown Law. (Andy and Gwen are non-Georgetown lawyers, but great cycling companions.)

Dinner tonight was at a restaurant adjacent to Hamburg's new Elbe Philharmonic hall. Because it caters to the theater crowd, it has two seatings and we ate at the early one -- 5:30 pm.  The main course was duck, which was excellent, as was the first course of melon and prosciutto. 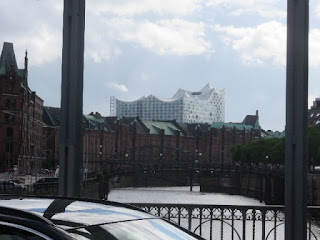