Well, I am safely checked in and this adventure is rapidly drawing to a close. I should have just about enough time to finish this post before boarding.

We left the Gillmore Winery this morning, and headed north for the airport on the PanAmerican Highway and had a fast, smooth ride to our lunch stop -- the Miguel Torres winery. Unlike the others that we have visited, which were all small operations with limited production, this is one of the large producers. Although they grow grapes in several regions of Chile, all of their processing is done in this one central location (except for the Pisco, which, by law, must be produced in a certain region to carry that name).

The highlight was the luncheon, possibly the best meal that we have had in Chile. We had four courses, each paired with the appropriate wine. The  first course was a fish ball (oddly colored purple) made with grouper. Then came a salad with several pieces of chicken in an excellent teriyaki sauce. The entree was a fetuccini (black in color) which we saw them making on the premises, with lots of clams, mussels, shrimp, and a piece of excellent fish. Dessert, was actually three desserts -- a fruit cup of some sort, a panacota  of sopapillas, and vanilla ice cream.  These words don't do it justice, so I will let the pictures speak for the meal. 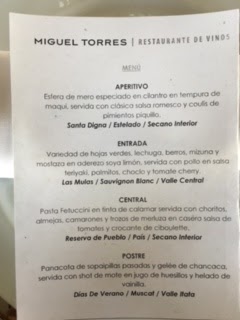 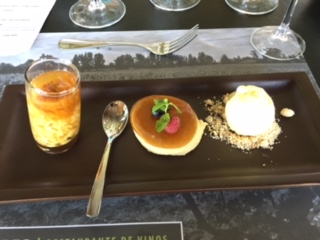 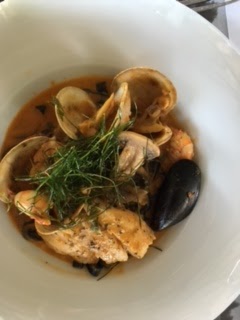 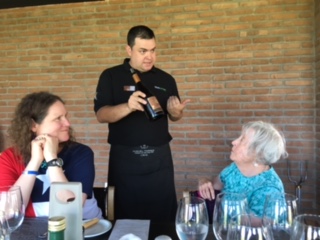 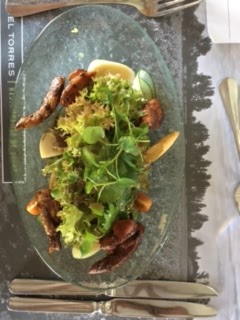 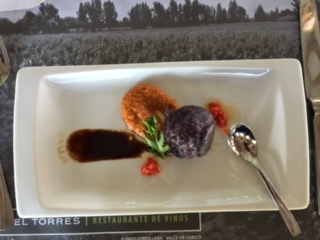 Possibly runner up for best meal was last night's dinner, a pastel de choclo. After salad, we had this main dish which was served in a bowl -- the base was similar to the filling of a beef empanada, and the crust was based on corn meal.  Again, the words don't do it justice, but, trust me, it was excellent.

We resumed our journey to the airport, anticipating a 4pm arrival. We had a monster traffic jam and only moved about a mile in an hour. It appears that the only reason for the tie-up was the toll booth. After that, it was smooth sailing to the airport and we arrived before six. Plenty of time for an 8:45 departure. Check in and security were a breeze, and I should be in the air in just about an hour.