We started this morning with a fairly long shuttle ride to the small and bustling city of Cauquenes where we stopped just long enough to use the rest rooms and ATMs, in order of need. This city was the epicenter of the 2010 earthquake, but they seem to have done a remarkably good job of restoration.

It was quite cool at the ocean when we got up this morning, but it quickly warmed up as we went inland. By the time we started cycling at 11 am, just outside of Cauquenes, it was near 80 degrees, and got even hotter as the day wore on. We had a few long hills which, fortunately, were quite gradual in slope. The paved surface was excellent and it was a good ride.

We made a lunch stop at a small farmhouse, where our hostess was preparing chicken empanadas in an oven which had charcoal both below and above the empanadas. We have had both baked and fried empanadas on this trip. I tend to prefer the fried (wonder why?), but they have all been excellent. While we were waiting for the empanadas, we sampled their homemade “vino chicha,” the local wine that seemed to be for sale at every farmhouse that we passed. This was really the juice of recently harvested grapes – thick and syrupy. It had not yet undergone the fermentation process necessary to turn it into wine. 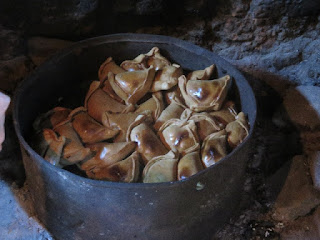 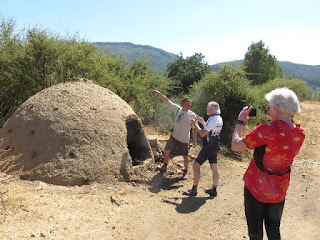 Throughout this trip, we have seen many signs proclaiming that charcoal is for sale. At our lunch stop today we saw this oven in which charcoal is made.

The next stop was a recommended ice cream store. The ice cream was served soft, and was much like gelato in texture and appearance. It was excellent, and was the perfect fuel to prepare us for the last 5 miles to the hotel. 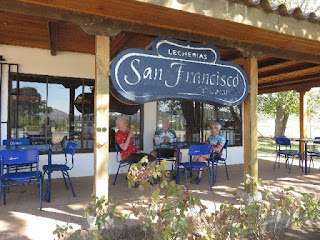 Our hotel tonight is located on the grounds of the Gillmore Winery. The rooms are by far the largest and most modern of any on this trip. We will be having a tour of the winery before our last dinner together tonight. Adjacent to the hotel building is a small fenced area with 3 ostriches, and two members of the world's smallest species of deer (whose name I have forgotten). 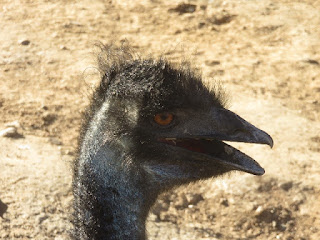 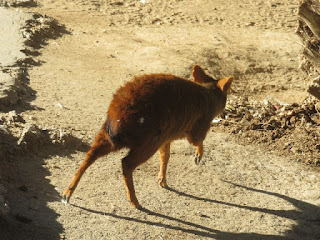 The only drawback is that there is no WiFi in the hotel, and the WiFi in the winery office is so slow that I decided to compose today's blog offline and post it tomorrow, probably at the airport.