We started off with bright sunshine for the first time, and pleasantly cool temperatures. We shuttled away from the hotel on the dirt road, and then started out in the village of Vichequen, with its statue of a witch. I think she was an omen of what was to come. 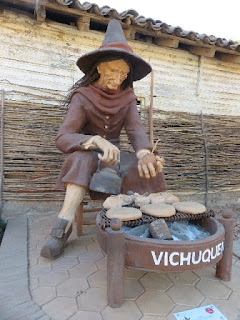 We had been forewarned that the ride would start with a killer hill, and a treacherous descent. Six of us attempted it; the rest took the van over the hill. I quickly realized that I had met my match and that taking the van might have been the better part of valor. The first four kilometers were all at a 13 to 18% grade. And my bike did not have a third chain ring for the extra low gears. It wasn't long before I was walking (and my bike was extra heavy because I was carrying my big camera and an extra telephoto lens!). Our guide, Santi, who was riding sweep, caught up with me fairly soon and he suggested that we switch bikes. His had a triple. This helped a little, but I was soon walking again. After a few more on-and-off stretches, we reached the first "summit." By this point, there were three of us, plus poor Santi, doing the ride/walk dance. (I later learned that five out of the six of us did some walking.)

I took my own bike back, and the next few miles were rolling hills. The descents provided enough momentum that the following climbs were easy. But then came the extremely steep and curvy descent. I had to ride the brakes all the way.

Once at the bottom, I felt like I had done a full day's riding. But, of course, we had the remaining two thirds of the route to cover. ALL FLAT!!! Initially, the scenery was uninspiring, but as we got to the coast, it became beautiful, and the last third of the ride was right along the ocean, with a tailwind. It doesn't come any better than that.

We all stopped for lunch en route. I didn't feel hungry, so I ordered only one cheese empanada, but quickly ordered a second. Appropriately fueled, I really enjoyed the last few miles along the coast to our hotel. 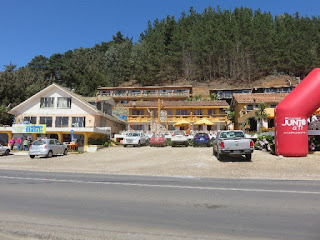 We are right on the beach and I have a wonderful view of the ocean from my room. The last of us arrived around 2pm, so we have lots of time to relax and curse the very temperamental WiFi. the WiFi is only available in the hotel restaurant area and at times it is impossible to connect; at other times connection speeds seem reasonable.

I am carrying two cameras on this trip, plus my iPhone. For some reason, my card reader will no longer read the pictures from my "big" camera, so I am limited in the pictures that I can transfer to the computer and include in this blog.

Our hotel/restaurant is known as "Donde Gilberto."  I have noticed several restaurants with names starting with "donde" (the Spanish word for "where") followed by a proper name. I had not noticed that before this trip. Translated literally, "Donde Gilberto" would be "where Gilberto is," but the sense of this naming convention is "Gilberto's place."

Today is the end of the "short tour," so three of our group will be leaving us in the morning. The rest of us have three more cycling days. Which means that the last washing of my cycling clothes is now drying on the balcony in front of my room.
Posted by Guy at 8:01 PM