Today was a good 43 mile ride -- flat and easy, but the ever-changing agricultural scenery was particularly interesting, especially for the first half. We are in wine country, so there were lots of vineyards, but also corn, tomatoes, and the occasional fruit orchard. It was cool enough for a jacket for the first hour, but then started warming up nicely so that it was hot when we finished around 2pm.
Near the middle of the ride, we rode next to a canal in which there were a dozen or more very old water wheels. They were used at one time for irrigation, to lift the water from the canal to the fields, but now they seem to serve mainly as photo opportunities. 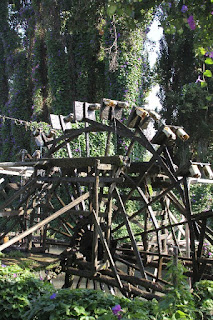 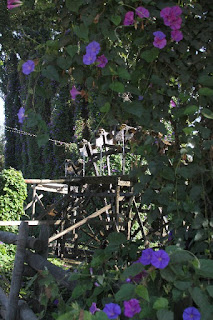 We also passed an interesting roadside shrine to St Francis of Assisi. It was notable because it was quite elaborate considering how far off the beaten path it was. 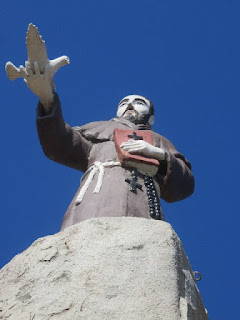 Although it was early (about 11am), we stopped for a group lunch at a small restaurant where we were well cared for. The table was laden with chicken sandwiches (plus veggie sandwiches for the vegetarians), sopapillas (fried bread), fresh tomato and avocado, as well as all sorts of fresh fruit including some delicious figs. Then there were pitchers of three kinds of juices -- pineapple, melon, or strawberry -- all freshly squeezed. (At our first hotel, there was always a choice of either peach juice or raspberry juice at breakfast). There was also a good looking dessert which I passed on, knowing that I still had about 25 miles of cycling.
The remainder of the ride was pretty much a straight shot to the hotel, through more of the same  agricultural countryside. We are staying at a winery complex with a hotel which is very, very nice. Since our group fills more than half of the 20 or so rooms that they have, they have closed the hotel to all except us. I liked the entrance sign which gives a new meaning to "straight ahead." 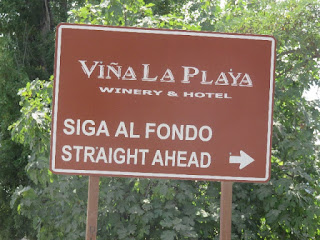