After a good night's sleep, i awoke around seven to find that it was still dark. We are quite far west, so that one would expect to be in a later time zone. Instead, we have late sunrises and very late sunsets -- well suited to the late dining hours which are the custom here. I enjoyed a good breakfast in the hotel and then set off to explore parts of the city that I had not seen on my one prior visit.

I had purchased a ticket on the Hop On/Hop Off tourist bus, which works well, except that the traffic in Santiago is so congested that progress is fairly slow. So, I only made two major stops. The first was at the Bella Vista district, noted for the graffiti covering the facade of nearly every building -- some of it excellent, some of it grotesque, but all of it interesting (not the kind of mindless trash we see so often in the US). Rather typical is this "Salon de Belleza" (beauty parlor).It looks like anything but a beauty parlor (but look at the woman applying make up in the lower right corner of the photo). 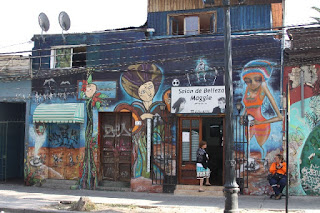 From there, I continued on foot to the Metropolitan Park with its funicular to the top of San Cristobal hill. The Park is noted for the Santuaria de la Immaculada Concepcion with its huge statue of the Virgin Mary. The statue is visible from many parts of the city below. Conversely, from the vantage point of the hilltop there are magnificent views of the city (almost 360 degrees), unfortuantely marred by the thick haze (which might explain the allergy symptoms I am experiencing.) 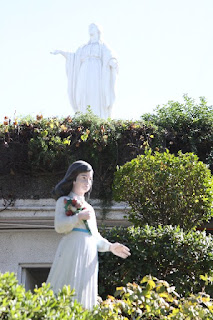 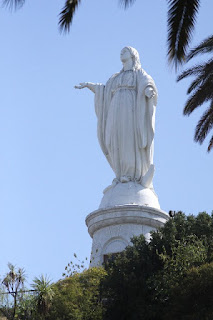 By the time I descended, I was starting to feel hungry so I set off for the day's principal destination -- the Central Market. I took the bus again to the Plaza de Armas and then walked along a pedestrian shopping street until I hit the market, one of the larger fish markets in the world. (If I translated the sign correctly, it is the  world's fifth largest. And, if I didn't, it is still pretty big.) After taking several pictures of lots of things I would probably never eat, I settled into one of the many seafood restaurants in the center of the market and had a delicious swordfish with a seafood sauce. (I had to check my dictionary. The menu
translated "albacora" as "swordfish."  In most of Latin America, "albacora" is albacore (tuna), but in Chile, it is, indeed, swordfish.The pleasure of eating it was enhanced by the musical accompaniment of two roving guitar players. (Reminded me of a certain banjo player at Pike Place Market in Seattle -- inside joke.) 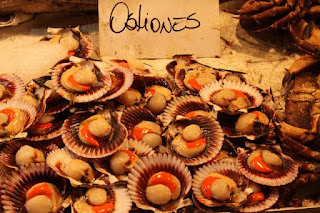 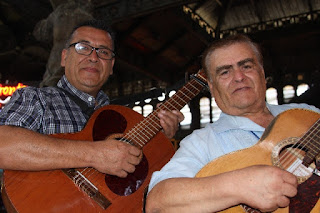 Back to the Plaza de Armas for a quick stroll. The highlight was watching the Carabinieri changing shifts. The area is heavily patrolled by police on horseback, on motorcycles, and with dogs. They say that crime in this city is low -- perhaps this is why. 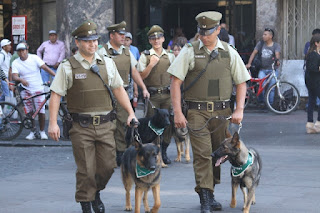 The Cathedral, which is located on this plaza, does not lend itself to interesting photos, but I like this reflected view in a nearby office building. 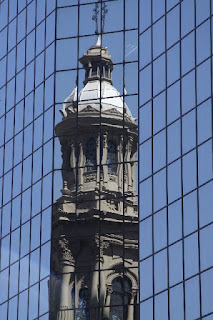 Fortunately I have lots of time today to practice my blogging skills. As the cycling begins in the next couple of days, I won't have as much time, but I shall do my best. Hasta Pronto!
Posted by Guy at 10:28 PM