Over the course of three rides, we covered about 47 miles (still flat -- the hills will be next week). We left our hotel in a light fog and biked about ten miles to a very old hacienda that has become a national museum. We had a private guided tour that lasted about an hour, which gave the fog time to lift. As we arrived, I took pictures of a few of our group, so it is about time to start showing some cyclists on this blog.

The hacienda is mostly preserved as it was originally built, with much of the furniture dating back to the 1850s. It has been extensively restored after a flood in the 1980s, and the earthquake of 2010.

We then pedaled about 25 miles to the Neyen winery, located in the "Napa Valley of Chile." We arrived there about two, for a lunch which was basically an indoor picnic with lots of very good finger food. Following the lunch we took a tour of the vineyards and saw some of the old growth vines. Chile (as well as Australia and New Zealand) is one of the few places in the world that escaped the phyloxera disease, so that there are some vines in this vineyard that are 120 years old (and others in Chile that are 140 years old.) We concluded our luncheon visit with a tasting of two of their wines. (This winery is owned by the same people who own Quintessa Winery in St. Helena in the Napa Valley). 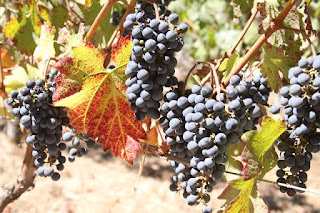 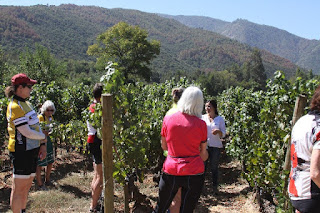 It was now four o'clock and about 86 degrees, so the ride to the hotel (another 10 miles) was optional, but several of us did it. It was actually quite pleasant, with a little breeze.

We arrived in Santa Cruz, a small city of about 30,000 where we will spend two nights. No riding tomorrow -- we will have a museum tour in the morning and a free afternoon.

Dinner was on our own tonight. Five of us went to a very pleasant Italian restaurant, where we enjoyed some delicious pasta.