Last evening, we had a surprise before dinner. Our guides had arranged for a special poolside performance by a group of indigenous dancers who perform as part of their efforts to preserve their heritage. There were four teenage dancers, with the older generation providing the music (which included a percussion insturment made of a horse's jaw.) We greatly enjoyed watching them while savoring appetizers of ceviche, tiny mushroom empanadas, a seasoned crab dish, and of course, the usual pisco sours, wine, and fruit juices. I solved my photography problem (the memory card was corrupted, so I reformatted it -- losing only about six photos that had not been backed up) and took well over 300 photos of the dancers. The one below is selected pretty much at random, since I have not had time to review them carefully. 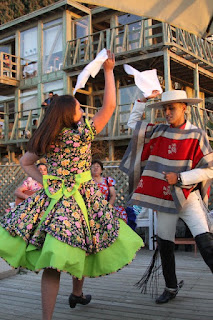 Today's ride was 46 miles with about 2800 feet of climbing. It was mostly rolling hills along the coast and through the coastal pine forests, but we had a couple of challenging, but short, climbs. We veered off the main route to a small coastal fishing village, Loanco, where we had lunch at a tiny restaurant. Jata was getting gas for the van, and Pablito was still riding sweep, so we managed to order using our limited Spanish, since the waitress spoke no English and there was no printed menu. She offered a variety of empanadas, most of which we had  tried before so we knew the names, but she also offered one with "macha." We couldn't figure that out, so she brought out a small plate of them for us to taste. They were small shellfish, with a taste and texture similar to clams. Most of us stuck to the tried and true queso and mariscos (cheese and shrimp) or plain cheese. We also shared a few large plates of salad. 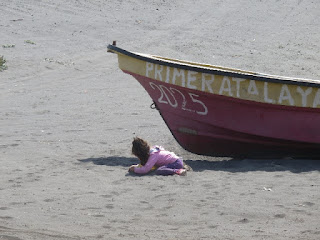 For several days we have been riding through pine forests, and being passed on the highway by large trucks with freshly harvested trees. These are grown to support the paper production industry which is very important here. We have also seen eucalyptus trees, which are also harvested, primarily for construction.

Speaking of construction -- most of the coastal area in which we have been riding was devastated by the major earthquake in 2010 and the tsunami which followed. (Apparently, there were a lot of needless deaths from the tsunami because the all clear was given too early.) Our hotel last night, for example, was completely destroyed in the earthquake/tsunami, and was rebuilt from scratch.

We have encountered large numbers of dogs in our travels. The vast majority of them are very sleepy and docile, hardly raising their heads as we pedaled by. I was only chased once, and it was really only a half-hearted attempt.

As we approached our destination today, we passed a number of strawberry field, with the fruit destined for US markets. I saw only one roadside stand selling strawberries. We have had lots of fresh fruit on this trip, especially at breakfast. Peaches, pears, pineapple, bananas, grapes, etc -- but no berries (although as I mentioned in an earlier post, raspberry juice was available at breakfast in Santiago.)

One of the things that has rally surprised me on this trip is that we have seen no banks or ATMs since we left Santa Cruz. I am sure that our guides will remedy that situation before we all take our leave. :)

Our lodging arrangements tonight are really interesting. Again,we are on the ocean (our last night on the water), and each of us has a separate "cabana.' These are fully furnished vacation units. Mine has two bedrooms, one with a double bed, one with a bunk bed and a twin, and an extra twin in the living area. 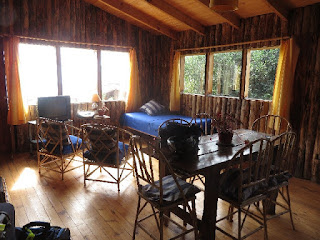 Our guides are preparing a special dinner tonight -- and we are invited to help them. So, today's rambling blog comes to an end.