Thursday, March 17, 2016 – Santa Cruz to Vichuquen Marina on the coast of Chile

Today is St. Patrick's Day, so it is fitting that we started it in the O'Higgins province of Chile. (We may still be in it, but I am not sure.) It was our first day with hills. We did about 2400 feet of climbing over the course of a 52 mile ride from Santa Cruz to the coast. I had expectations that at some point as we crossed the coastal range we would be at a high point with majestic views of the Pacific. That turned out not to be the case – I first saw the ocean when I was about 200 yards from it. But, what a magnificent sight.

We started out in light traffic in the city of Santa Cruz on a day that was overcast, and stayed that way until we were almost finished riding. That was both good and bad – it was comfortable riding weather (about 60 degrees most of the day), but it did nothing to enhance the scenery which was rather boring for a good part of the day.

We stopped for a group picnic at an olive oil processing cooperative near the town of Lolol, and then continued our March to the sea. It was only in the last two miles that I observed anything worthy of note. First, were several salt evaporation ponds where people were processing and selling salt. Interestingly, many of the road side sands proclaimed that they were selling salt and quinoa. I don't know what quinoa looks like when it is growing, but I didn't see anything that looked like a quinoa field to me. I was later told that they do indeed grow quite a bit of it here. 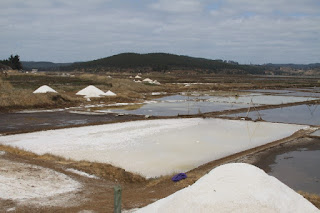 The second interesting thing was the brown llama that was standing in the middle of the road that I was biking along. After taking his picture, I had to decide whether I could safely pass him. Deciding that the answer was yes, I came up alongside him, and he started trotting along next to me.
It turned out he was looking for a break in the fence to get back into his pasture, and we soon parted ways. 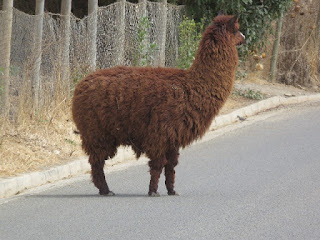 Soon after we arrived at our regrouping point, a small restaurant that serves what Jata tells us is “the best seafood soup in Chile.” I think he is telling the truth. There was so much shellfish – scallops, clams, pala (something new to me) and others that I cannot name – that there was hardly room for broth. We were right on the water, so I got a few pictures of the fisherman landing and sorting their catch of the day. 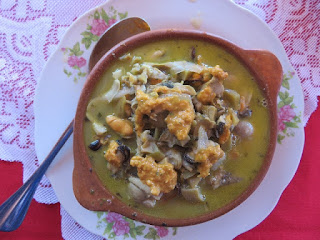 From there, we loaded the bikes and climbed in the shuttle for a dusty ride along an unpaved road to our destination for the evening – the Vichuquen Marina, a very pleasant lakeside resort. We are about to gather for dinner, so I will sign off, and post this whenever we get a good WiFi connection.
Posted by Guy at 7:53 PM