Today was a proper finale to a wonderful eleven days in Italy. We went to Pisa in absolutely gorgeous weather. Along the way, Alain and I stopped at the Nozzano Castle, most recently renovated in 1395! While walking around the small hilltop town, we ran into a villager who invited us to join him for the view from his back yard and small garden. He then opened his garage and showed us his sculptures, the wine that he was making, and finally, a "family tree" like representation of Mussolini's top military officers in 1942, among whom was his father. He also had a photo of his father, dressed in the gear of the alpine command in which he served. Only with Alain's help translating would this visit have been possible. 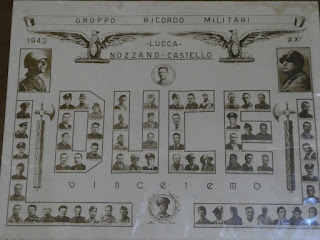 Very slow WiFi ton Wednesday, so I am adding the pictures and posting this on Thursday from Pisa Airport.

Following the visit to Nozzano Castle, we went on to Pisa. My first surprise was that there were huge throngs of people from the cruise ships that visit the port of Livorno and then bus the people to Pisa. I did climb to the top of the Leaning Tower of Pisa which afforded magnificent views from the top. One more item off the bucket list. I also had time for brief visits to the Cathedral and the Cemetary (Camposanto). 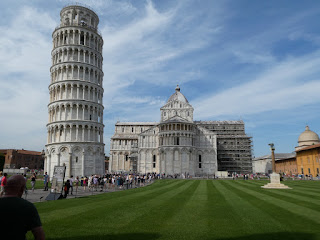 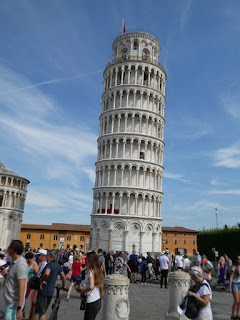 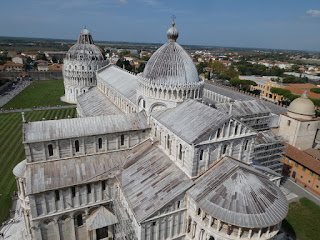 We had a great farewell dinner at a restaurant in Lucca. For starters we had three different types of bruschetta -- eggplant, bell peppers and tomato. The latter two were excellent; I skipped the eggplant. Then we had a surprise -- a zucchini flan. I am not normally a fan of zucchini, but with the rich parmesan sauce, it was not to be missed. The pasta course consisted of faro (a grain) in a rich sauce, so that it was almost like a stew. The main course was a mixed plate of fried seafood -- shrimp, calimari, etc. , with a few vegetable thrown in. Delicately fried like tempura, they were delicious. All this was followed by a choice of desserts -- I had creme caramel.

I awoke this morning (Thursday) to see a message from my driver that he will pick me up at 11 am this morning. That will make him 12 hours early. I hope that he sees my message with the correct time.

Getting to the airport this morning was a piece of cake since I had my own personal guide in the person of Lisa who had a plane shortly before me to take her to the next tour that she will be guiding.
I am all checked in a heading for home via London and Los Angeles (there is no direct flight to San Francisco in the afternoon).

I close this year's cycling blog with a sign that I saw in the shop in Pisa where I had lunch yesterday. Several years ago, Thomas and I cycled in Italy with a group whose motto was "Pedale forte, mangia bene." [Pedal Hard, Eat Well.]  Here is a variation on the theme.