Getting near the end of this journey. We are in Lucca now, for the last two nights.
First stop today was the Medici villa in Cerrito Guidi, with a great view. The "stairway" up to the villa is not really a stairway, but a sloped and terraced incline designed to let the horses ascend to the villa. Inside was an interesting arms museum. Only a short visit, but very worthwhile. 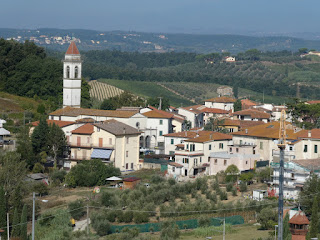 Next stop was Montecarlo (of Tuscany, not Monaco). This was another pleasant small town with lots of restaurants and shops and some good views. Some had lunch here. Others waited until the arrival in Lucca. 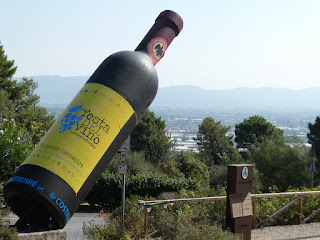 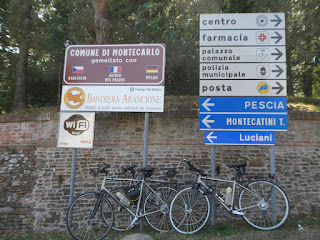 Lucca is a fascinating town, surrounded by an intact defensive wall that is centuries old. We saw most of it from the outside as the van made its way around to the entry portal that would get us to the hotel with the least amount of traffic inside the city center. After settling in, I had a delicious zuppa di pesce for lunch and then explored the city center on foot. Of particular note is the Piazza dell'Anfitetro, site of an ancient Roman amphitheater, hence its shape. It was turned into public housing in the 1830s, but today is the most expensive real estate in the city. 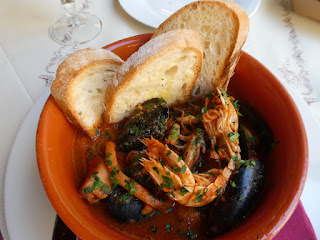 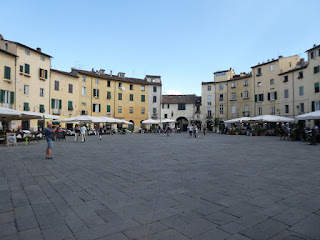 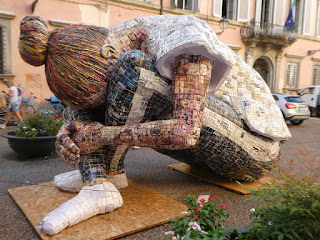 Tomorrow is the last day of cycling, and those still riding will do an out and back ride to Pisa. I will get there in the van, but I will get there, and I have a ticket to climb to the top.
Posted by Guy at 8:13 PM