I had a really good trip over, flying on KLM airlines. As I check my bag in San Francisco, I asked the gate agent why I did not have TSA pre-check on my boarding pass. She was able to do her magic, and get me a new boarding pass with pre-check. That turned out to be a great move because the regular security line was very long, and there was only one person ahead of me in the pre-check line.

After a short delay on the taxiway because of a "technical issue" we were underway and had a smooth flight and I managed to get a few hours of sleep.  I breezed through passport control and grabbed a taxi. The driver was very pleasant, but I noticed that as soon as we left the airport and got on the motorway, he took off his seat belt. Strange, but he got me to the hotel quickly and safely.
Not surprisingly, my room was not ready at 10AM, so I checked my bags and set off on a walking tour using the Rick Steves audio guide for the "Amsterdam City Walk" that I had previously downloaded to my iPhone. Since the audio on my phone streams directly to my hearing aids, this worked perfectly. I walked as far as the famous flower market. There were lots of tulip bulbs for sale, but the only tulips at this time of year are plastic -- and there were plenty of those.

The temperature was already in the nineties (and I had long pants and a long-sleeved shirt on), so I stopped for some hydration and people-watching. 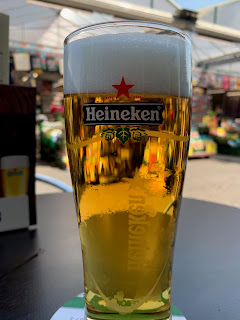 Along the way back I had my "lunch" of the very popular pommes frites with mayonnaise.

Two years ago when I was in Copenhagen, I learned that that city had overtaken Amsterdam as the most bicycle friendly city in the world. That may be true, but there are still cyclists everywhere in
Amsterdam, with lots of bicycle parking and dedicated bike lanes everywhere. Below is a picture of one of several bike parking facilities near the Central train station. It is not obvious to me how you get the bikes up to the top tier. 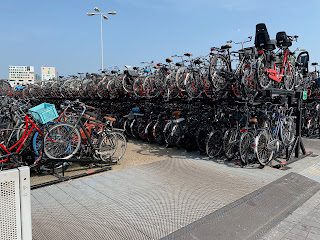 Tomorrow afternoon I meet up with the rest of the group and we will have a very short test bike ride here in the City. The heat wave (96 degrees right now, heading to 99) is supposed to continue through tomorrow, but should then ease up as we begin our tour.