My schedule had me arriving in Venice at 11 am, and there was a performance of La Traviata at 3:30 pm. Although I knew it would be tight, I purchased a ticket and meticulously studied the logistics of getting from the airport to the hotel and then to the opera, or alternatively from the airport directly to the opera if the timing was really tight. Having made these plans, I decided that I would go completely carry on for this two week cycling trip to speed my way through the airport. 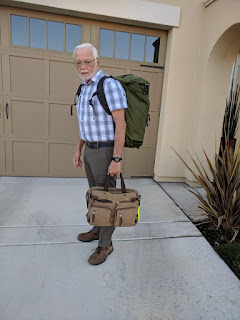 The first glitch was an unexpected construction delay on the way to the airport. Fortunately, it was only thirty minutes, and I made my initial connection to Chicago. In Chicago, however, the next glitch was not so minor. The connecting flight to Venice was delayed two hours. Getting to the opera was going to be tighter than expected.

Fortunately we made up a little time in the air, and arrived in Venice only ninety minutes late. With my carry on luggage getting through customs and immigration was a breeze. I quickly got some money from an ATM and tried to buy a ticket for the ferry that would get me to Venice. The machine would not take my credit card, but it take cash -- luckily I had just got some. The ferry would have taken an hour and a half to get to the spot from which I planned the short walk to Teatro La Fenice, the opera house. But I noticed some earlier stops that involved slightly longer walks but significantly less time on the ferry. So, using Google Maps I selected a ferry stop that involved a 19 minute walk but saved an hour on the ferry.

Google Maps did a great job of guiding me until I was about seven minutes (it said) away from the theater. After that it abandoned me, and I was left asking for directions every two or three minutes. I ended up walking for an hour, with that heavy carry on luggage until I got to the theater at 2:30. The doors didn't even open until three, so I sat down at a cafe (no seats in the shade left) and had a bottle of sparkling water and a large plate of gelato.

Then, into the theater, check luggage and settle down for the performance. One reason that I wanted so much for this to work out is that this the theater where La Traviata was first performed. It is also one of my favorites, and one that I had seen in Havana, Cuba (with Kathleen in 2003), in Rome (with Thomas), and a few times in the US.  It was worth the effort -- the performance was outstanding, the opera house magnificent and my seat was perfect -- center aisle in the fifth row. An espresso during each intermission kept me awake. 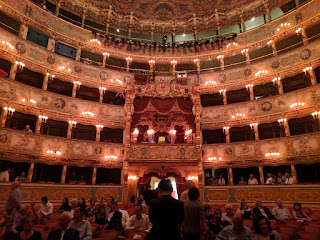 The walk to the Vaporetto (water taxi) to the Lido where my hotel is located was relatively easy, as was the short walk from the ferry dock to the hotel. Check in was easy, and I then walked to a nearby street crowded with eateries, picked one at random, had a pizza and beer, and headed for bed after a long but satisfying day.

This afternoon we will meet for bike fitting and a short test ride. Until then, I shall explore at a more leisurely pace without luggage!
Posted by Guy at 7:21 AM