Last night's dinner at the Agroturismo was excellent. We had a short presentation by Giuseppe, the proprietor, regarding the wines produced in small batches on the estate, and tasted several of them. This was followed by a buffet of appetizers all made with organic produce from the state, including nettles (!), tomatoes, egg plant, and sage leaves. The sage leaves were dredged in butter, then deep fried, emerging like tempura. They were particularly good. Dinner consisted of a variety of organic vegetables from the farm, coupled with an egg plant parmigiana and some guinea fowl (the birds purchased from a nearby farm,) I am not normally a fan of eggplant, but this was delicious. Do you think it cold be the cheese? 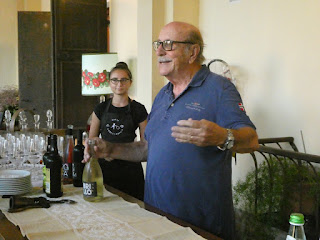 Today we had an early breakfast and were on the bikes by 8:15, At about the halfway point, we stopped for an hour long guided tour of Villa Badoer, a masterpiece of architecture and a UNESCO World Heritage Site. It was designed in 1554 by Andrea Palladio, considered one of the most influential architects in Western history. 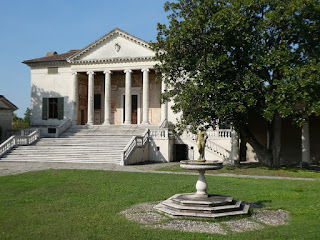 Particularly fascinating were the frescoes on the interior and exterior walls. At some point, the residents covered the with plaster and repeatedly hammered the plaster to make it adhere to the walls. Around 1960, the existence of the frescoes was discovered and the plaster removed. The frescoes are no visible, hammer dents and all. 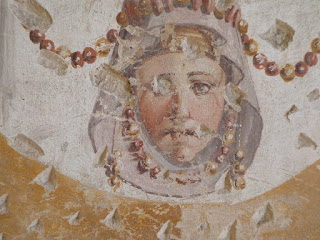 After our tour we looked for lunch. The first cafe that we tried served only drinks, no food. After walking around, we found a small bakery with a proprietress who spoke excellent English. She had some prebaked flat breads and would make sandwiches upon request. I settled upon a cheese and onion flatbread which was quite tasty and filling.

We then embarked upon the remaining 22 miles or so of the day's cycling. By now it was quite hot, and the going was a little tougher than in the morning, even though it was still remarkably flat as we rode along the Po river toward our destination of Ferrara. The scenery was more interesting than yesterday, and the approach to Ferrara was particularly noteworthy because of the remarkably well preserved wall that surrounded the ancient city (Ferrara is another UNESCO World Heritage Site.) 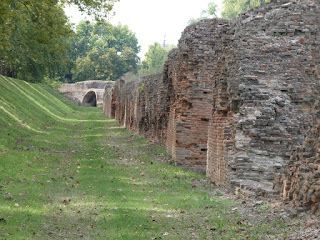 After some free time to walk around the city we gathered for aperitifs and our daily briefing at a bar in the shadow of the Este castle which still dominates the center of the city. 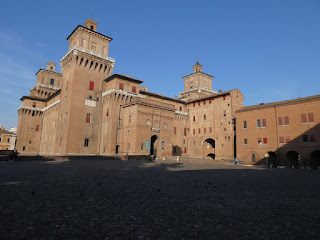 Dinner was on our own tonight, and I joined Brad and Shelagh for an al fresco dinner at a restaurant that is only a stone's throw from our hotel. I had tagliatelle with smoked swordfish with a side salad. It was excellent, and just the right amount of food.