Fridy and Saturday, Faenza to Ronta to Florence

As mentioned in the previous post, Friday was the day to cross the Apennines. Alas, it was not meant to be for me. Shortly before Marradi where the steeper part of the climb began, I hit some gravel, went off the road and hit knee, elbow and shoulder. I have minor road rash on the knee and elbow and some discomfort in the shoulder and ribs. Nothing serious, but it was enough to keep me off the bike for the rest of Friday and all of Saturday. This is my twelfth bike tour, and the first time that I have lost any cycling due to a fall, so I can't complain. Hopefully I will be in shape to ride on Monday. (Sunday is a day off, in Florence.)

I did manage to do 21 miles and almost 1400 feet of climbing before the mishap, so I did get to cycle into Tuscany. 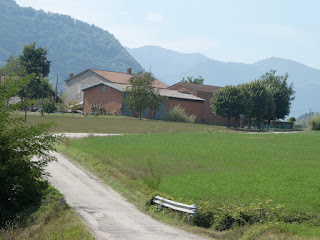 Fortunately the van was not far behind me when I fell. I got up, and pedaled about a mile when the van caught up and stopped. Alain gave me excellent first aid and I rode the van to join the others for lunch in Marradi. 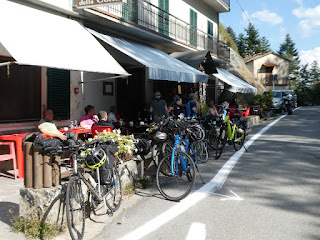 We stayed at a pleasant hotel in Ronta, where we had an enjoyable happy hour on the balcony and then another huge dinner for the entire group. Unlike the three hour chef's tasting of the previous night which four of us enjoyed, this meal was served rapid fire -- lots of good food and many courses, but we got through it in somewhat less time.  Given the sore shoulder, however, I postponed blogging until this afternoon in Florence. 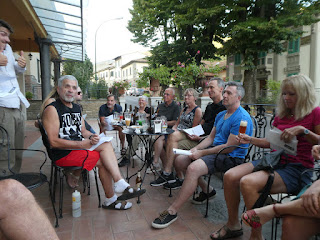 Being sidelined and riding in the van has one advantage. I had more opportunity to take photos of other cyclists on the tour. I don't have room for all of them in the blog, but here are a few: 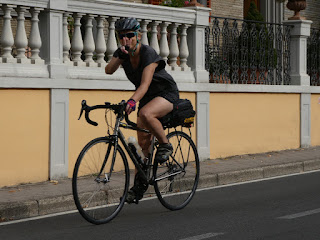 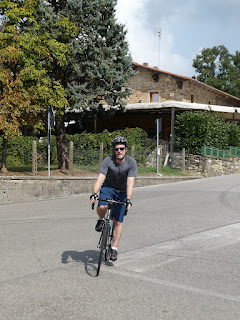 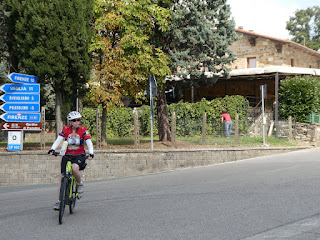 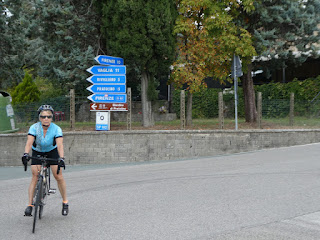 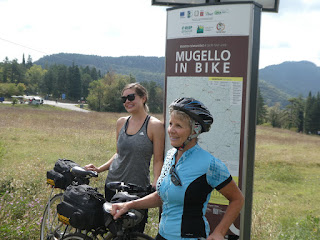 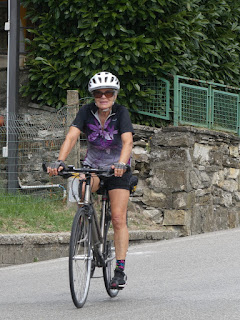 We stopped for lunch in the town of Fiesole. It is fairly high so that if affords an excellent view of Florence in the distance. Several of us had paninis that we bought from a truck which is a mobil cheese and meat market that will make sandwiches for you. Mine was excellent and cost only two Euro.

While we came into Florence, the remaining cyclists rode into the city en masse. Usually we are each on our own, following chalk arrows laid down by one of our guides. The route into Florence, however, is so congested and difficult to navigate that the group divided into to smaller groups, one led by Alain and one by Lisa to make their way into the city.

Since we will be at this hotel for two nights, I had hoped to get laundry done tomorrow. No such luck, as tomorrow is Sunday. [Side note -- the fisherman don't go out on Sunday either, so you won't get fresh fish on Monday in Italy.] So, I did  my own in the bathroom sink. With only three days cycling left, this should be the last time! 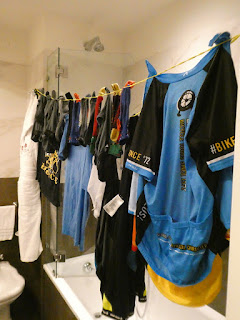 We have another group dinner tonight, and a guided walk of Florence tomorrow. In the afternoon, I have a ticket for the Uffizi at 1:30 pm.