Only 33 miles of cycling today, still flat, but lots of interesting things to do and see. We started out the day with a bus ride to Comacchio, another town with canals like Venice, and still a seaport. Our bus was about 45 minutes late, so we lost some of the time that we would have had to explore Comacchio. Our first stop, right off the bus, was the fishmarket. 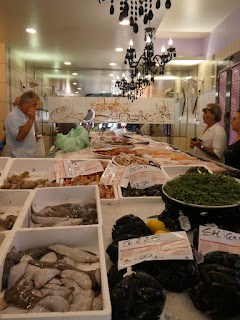 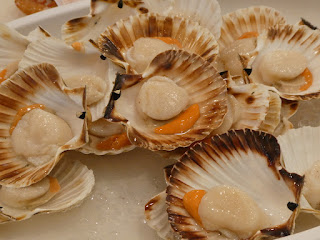 Next, we stopped at a museum which featured artifacts from a ship that sunk sometime between 19 and 12 BC. (They can pinpoint the date because of the markings on the lead ingots which were the ship's cargo.) Because it was buried under mud in an oxygen free environment until it was discovered in 1980. The wooden hull is not displayed (it has to be maintained in an oxygen free environment) but many of the artifacts are, including remarkably well preserved leather sandals. 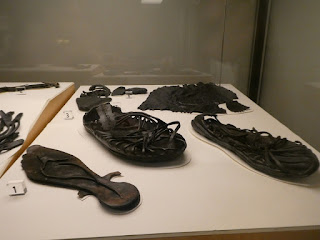 Now, at 11:45 it was time to get on our bikes, and it was getting pretty hot. We had to ride about 14 miles to a place where we had reserved a "picnic" at a small countryside restaurant. It was actually a multicourse meal, with two pastas to start, and a buffet with many vegetables, some small fried shrimp (eat the whole thing --head and tail), and the local specialty, marinated eel. The last was not overly popular.

Back on the bikes for another 20 miles or so to our hotel for the evening in Ravenna. Right after the restaurant, we passed through a wildlife preserve where large numbers of flamingo were feeding. They were far away, so the picture was taken at the maximum zoom of my camera's range. 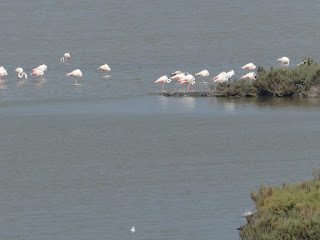 After showering and resting a bit, we met for a walk through Ravenna, passing Dante's tomb and the mosaics of San Vitale,  and Sant'Appolinare Nuova. Neither words nor my pictures can do justice to these fabulous mosaics which are the last/best preserved from the Byzantine era. They date back to the fifth and sixth century. They are immense, covering the walls and ceilings of the churches. From the floor you can't even tell that they are composed of millions of small precious stones. 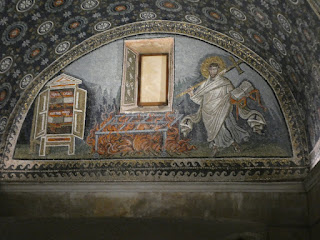 After that it was back to the real world for a light supper of white pizza with sausage
Posted by Guy at 8:54 PM