Day 6 Postira to Bol,
Side Trip to Vidova Gora

Although it changed often, the weather was generally cooperative today. We left the hotel around nine and had two hours to reach Pucisca about 16 kilometers away. This was more than enough time, although the terrain was a little hillier than some of us expected. We had a series of ups and downs – what we called “rompapiernas” (legbreakers) in Spain last year. Actually, it wasn’t tough, but it was a good start to another interesting day.

The reason for wanting to be in Pucisca by 11 was that we had a guided tour of the stone carving school there. As I mentioned before, the island of Brac is famous for its limestone, and this school helps to preserve the ancient arts of carving the limestone with only the hand tools that were classically used. The school is a combined high school and trade school with both three and four year programs. The tour was very interesting and informative.

Before the tour started, I had a conversation with Rocco, a local gentleman in his mid-seventies. He had been born in the town, but left for Sydney Australia when he was 24 and stayed for 40 years. He returned to spend his last years in Pucisca. Following an Experience Plus tradition, I gave him an Experience Plus cap so that he could recall his interaction with this bunch of American cyclists.

Following the tour, we began a long, but not terribly steep climb to a spot where we stopped for snacks and a brief rest. At this point, I peeled off from the rest of the group for the climb to Vidova Gora, the highest point in the Croatian Islands.  It crests at 778 meters (about 2550 feet).  Along the way, I experienced a few sprinkles, but no real rain. (Those who went straight on to Bol, our final destination, had some rain.) The climb was actually quite gentle, and I was pleasantly surprised to realize that the top was at 780 meters, not 900 meters as I had somehow implanted in my mind. Unfortunately, there was a lot of fog at the top, so there were no really good views as a reward for all the climbing. 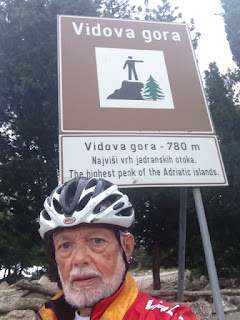 The remainder of the ride to Bol, was generally downhill, and very easy. The last five miles or so consisted of a really nice descent to the ocean along a well paved highway.  Lots of switchbacks provided a variety of scenic views. I was torn between the desire to enjoy the sheer pleasure of the descent and the desire to capture the view with my camera. I ended up making only one photo stop. 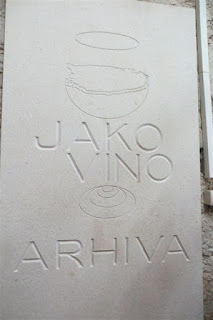 After arriving in Bol and freshening up, I rejoined the group. We had a very informative visit to the premier winery on the island where we saw the winemaking process demonstrated and were offered tastings. Although the winery dates back to 1903, it became known for its premium wines under the present ownership – led by a man named Jako. For a while, it was known as “Jako Vino,” but since this translates as “strong wine” they felt the need to change their image, and today the wine is known as Stina. Nonetheless, the Jako Vino logo is fascinating – take a look at the image of the wineglass in the logo – the shape at the top is the outline of the island of Brac.

Dinner was at a small restaurant near our hotel. As usual, it was excellent. The centerpiece was a fish called John Dory, one that I was not familiar with. It was a fairly firm fleshed fish with excellent flavor, and expertly prepared. While awaiting our meal, I captured this photo of a fisherman and his dog.
Posted by Guy at 10:16 PM