Today we moved inland, cycling through olive groves and vineyards. After a few  short but steep climbs, we descended again to the sea and the old town of Trogir (another UNESCO World Heritage site). We were on the road by 9, and even with a very leisurely pace and many photo stops, I was at the hotel shortly after noon. (And I no longer own the yellow jersey.)

The terrain is extremely rocky and it is a wonder that they can eke any crops at all out of it. In the photo on this page, you see grapes and olives growing together on the same inhospitable surface. It was more common to see the grapes set apart, but I doubt that we saw a vineyard as big as an acre. Certainly a far cry from what we see in Napa. 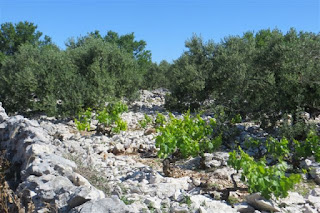 Once again, the weather is delightful. I’ll call it “balmy” today. I am writing this while sitting on the balcony of my room at the Palace Hotel, watching a sailboat pass on its way to the harbor. Lunch and dinner are both on our own today, leaving us lots of time to explore Trogir. The small walled city dates back to the 4th century BC when it was a Greek colony. Later it became a Roman municipality.

The highlight of the town is St. Lawrence’s Cathedral a romaesque structure begun in 1213 and finished three centuries later. There is a small Treasury in the Cathedral which serves as a museum of several old church artifacts, many dating to the sixteenth and seventeenth centuries. After visiting the interior, I climbed the bell tower via the rickety stairs (especially the metal ones at the top). The fantastic views in every direction were a nice reward for the climb. 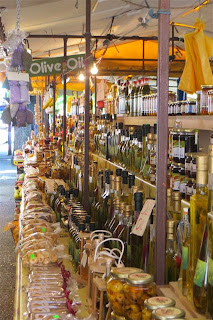 After visiting the Cathedral, I walked through the market area, located outside the walled city. Here I saw several old women selling the small amounts of produce that they had, and several vendors with prodigious quantities and varieties of olive oils, figs and fig products, and honey of many varieties.

We don’t have any really long riding days on this tour – we generally finish fairly early which leaves us lots of time to explore. Today’s ride was 26.6 miles and involved about 2400 feet of climbing.
Posted by Guy at 4:44 PM