After a solid 24 hours of traveling, from San Francisco, to Amsterdam, to Berlin, and finally to Split, Croatia, I arrived at my hotel in Split around 6:30 pm.  It is a charming city which, unfortunately, I will not have much time to explore since the tour leaves the hotel at 9:20 in the morning. So, I will jump ahead to Sunday, and Day 1 of the tour.

I had breakfast on the patio outside the hotel, meeting several of the other riders who will be on the tour. There are to be 14 of us all together. Promptly at 9:20 we met with Sylvia, one of our guides, and loaded our luggage on a large comfortable motor coach for a one and a half hour ride through beautiful countryside (in perfect weather) to Skradin where our hotel is located. 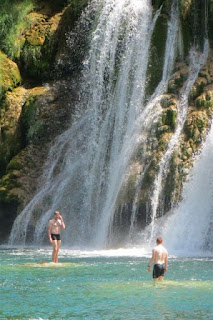 Bicycle fitting is scheduled for later this afternoon. After checking into our hotel, we all boarded a boat for a short excursion to the national park of Skradinski Buk to visit the waterfalls and enjoy the scenery.

After a light lunch at a cafe in the park, we returned by boat to Skradin and proceeded to get our bikes fitted. The bikes are the same as the one that I rode in Spain last year -- titanium frames by Van Nicholas.I enjoyed the bike very much last year, and on the basis of a short eight mile test ride today, I think that I will be very content again this year. The suggested test ride was only eight kilometers, but I overshot the turnaround point and did about 13. Still a very short ride, but it felt good to get in the saddle, even though I have only been off the bike since Thursday.  Somehow, an airplane seat just does not give the same satisfaction as a bike saddle! 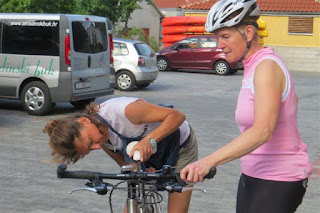 While out on the test ride, and having realized that I had deviated from the suggested route, I decided to look on Google Maps to see if I could devise an alternate loop ride back to Skradin.  Google Maps has not gotten around to this part of Croatia yet. I did use Strava to record the ride and it has been posted on my Strava page. I only started using Strava about a week ago, so this is very much a test of that tool for recording my ride data. (I also have my Garmin with me, and am uploading that data to the laptop.)

(Later) -- Just got back from dinner. It started at 7:30, and we finished about 10:30. Three hours! Can't do that every night. We started with steamed mussels and local clams.  Then we had a wonderful risotto that took over seven hours to prepare (it was made with veal which was simmered for all that time with a variety of herbs and spices before the rice was added). Next was a main course of grilled tuna with a side dish of kale and potatoes. The finale was a cream filled pastry with lots of fresh cherries as an accompaniment.As the fourteen of us (plus three guides) got to know each other, we had a most enjoyable evening. Breakfast is at 7:30 so it is time to sign off.
Posted by Guy at 11:06 PM