Despite the late night last evening, I awoke at 5 am and despaired of getting back to sleep. Next thing I knew, the alarm clock was letting me know that it was 7 and time to get up. Breakfast was at 7:30 followed by the briefing on the day's ride. Since it was our first daily briefing, it was a little longer than usual, but we were on the road around 10 o'clock.

We started with a gentle climb (probably 3-5 % grade) for about two and a half miles, and then had some easy biking to the town UNESCO world heritage city of Sibenik where we dallied over coffee and then wandered through the old city. This city is unique among other coastal towns in Croatia in that it is the oldest town built by native Croats instead of Venetians, Byzantines, Hungarians or Austrians. I stopped in the Gothic Cathedral of St. Jakov (St. Jacob, or St. James) and then wandered through the narrow medieval streets. Old though they may be, they were full of small boutiques with expensive wares. At one of the touristy souvenier shops, however, I was able to get an inexpensive pair of goggles since I had forgotten to bring my cycling glasses. 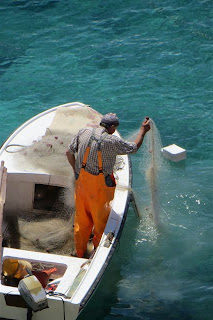 From Cybenik on, we hugged the coast on the gently rolling highway, leaving the main road several times for smaller roads that passed through tiny villages. Though we didn't see many people at mid-day, fishing did appear to be an important part of the local economy. In one of these small villages was our suggested lunch stop, which I completely missed. Most of the others found it, although several decided that it was "too upscale" for a casual bike ride lunch, and opted to continue on to our destination, Primosten.

We are staying at a very nice beach resort hotel, so I took the obligatory (a self-imposed obligation) dip in the Adriatic.It was very cold, so I didn't stay in long. After returning to the room I did some laundry in the sink simply because I didn't want to pass up the opportunity to hang up clothes to dry on the balcony railing in the perfect weather. They should be dry before we leave for supper in about 40 minutes.

It was an easy day, with about thirty miles of cycling. The roads are well paved and remarkably free of broken glass and other debris. For the most part, they have virtually no shoulders, but we haven't seen a lot of traffic and the cars have given us plenty of room when passing.
Posted by Guy at 5:41 PM