Our final day of cycling

Before getting to today's grand finale to our cycling tour, I must start with last evening's dinner. Prior to eating, we took a short boat ride through the marshy waters near our hotel where, I suspect, the frogs and eels that were a major part of our dinner came from. That's right -- frogs and eels. The meal started with the best bread that we have had in Croatia, along with some salad of tomatoes, peppers, and onions and the usual platter of prosciutto and cheeses. Then came a platter of what looked like egg plant rounds, but was actually sauteed frogs. Not frog legs, but small frogs. They were delicious, but took a lot of work to get the meat off the bones. After this, was the star attraction -- the brodetto, a delicious stew of frogs, eels and fish (mullet, I think). This was served with polenta.

The weather looked ominous as we started out for our last day of cycling. We started off through the bustling village of Metkovic and then through the fertile agricultural area of the beautiful Neretva estuary, before beginning the climb to the Bosnian border. We actually crossed into Bosnia through a small, "unofficial," border crossing point, usually used only by the local population. We had special permission to cross and were expected.The sole Croatian border guard inspected my passport closely, as did his colleague, the sole Bosnia border guard. As they finished, some other members of the group came up and were waved through without the need to produce passports.  It was only about five miles until we reached Croatia again, and this time I was waved through by the sole Croatian guard ( I never did see the Bosnian guard).

Now we started the descent to the small fishing village of Mali Ston, our destination for this evening. We had great views of the large area in which mussels and oysters are farmed. (Guess what we will be having for dinner tonight!, as well as of the ancient wall built by the republic of Dubrovnik for protection against attacks from the Venetians, Turks, and various pirates sailing the Adriatic.Ston (the larger town encompassing Mali Ston) was the second most important town in the ancient Republic of Dubrovnik, largely because it was the only salt producing town in the region. We will visit the salt works this evening before dinner. 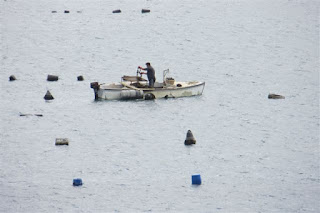 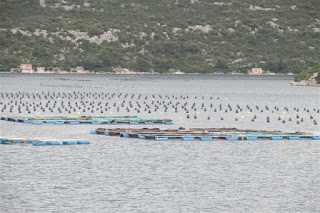 The weather gods were with us today. The rain started about three minutes after the last cyclists arrived in Mali Ston.  Tomorrow we will shuttle to Dubrovnik where I will spend a day. Then I will fly to Germany where I will rejoin Kathleen, Doug, Monica and Sammy for a week before heading back home.
Posted by Guy at 4:57 PM