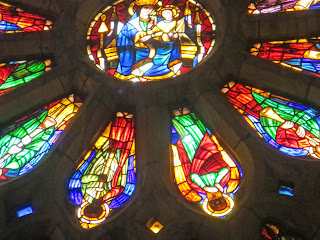 I slept in until 8:30 this morning, and it really felt good. After a leisurely breakfast in the hotel, I caught up on email and so forth until it was time for our guided tour of the Cathedral. We had a local guide who gave a very detailed and fascinating presentation on the Cathedral as well as the  Church of San Isidoro and a Gaudi building which we also visited. 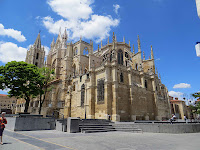 The Cathedral in Leon is the greatest in all of Spain in terms of its stained glass, and second only to Chartres in France in this respect. Some of the stained glass is currently being cleaned -- a project that began in the late 1990s. To clean the stained glass, it must be removed temporarily from the Cathedral. At this point, no one knows whether there will be enough money to finish the entire cleaning. Other restoration works are in progress as well. It is hard to believe that the entire Cathedral was built in less than a century. 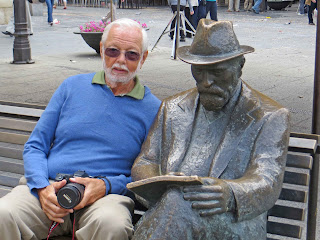 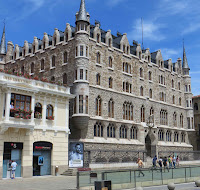 After a visit to the nearby Church of San Isidoro, we passed by one of only three buildings outside of the Catalan region designed and built by the architect Antoni Gaudi. (Kathleen and I had visited his famous Sagrada Familia (still unfinished) and Gaudi apartments in Barcelona on an earlier visit to Spain.). Here you see the building, now occupied by a bank, as well as me sitting on a bench with Gaudi himself.


The city is very quiet now, since it is siesta time (generally about 2pm to 4:30pm). The streets are nearly deserted, so I took advantage of the quiet to come back to the hotel and catch up on this blog. Who knows -- I may even take a nap before our evening meeting and dinner.

A word about the passport that I have mentioned in many of these blog entries. At the completion of the journey, a pilgrim who has walked or ridden on horseback at least the last 100 kilometers, or bicycled at least the last 200 km, receives a certificate or "compostela." The proof of completion is the passport which you can get stamped along the way at principal churches monasteries, alburgues, as well as many hotels and cafes. You need at least one stamp a day, but this is not difficult. As you can see, mine is nearly full.