Today was a fantastic day, and at 10:30 in the evening, I am not sure how much of it I will be able to describe. but first, a brief note about last night. After yesterday's ride, I washed out my cycling clothes and put them to dry outside my window. They were almost dry by dinner time, but I decided to leave them where they were. Of course, it rained while we were at dinner -- back to square one. (They actually finished drying pretty well by morning.)

Today was a 53 mile ride with 4,740 feet of climbing, most of it in one  long hill. Although long (about 15 km), it was not too steep. Most of the time  it was at 7% or less, with a few pitches at 10-12% (all this assumes you believe the Garmin GPS on the bike). The scenery was fantastic, and the weather was generally cooperative. For most of the time we had a good cloud cover which protected us from the heat and sun, but the sun seemed to come out just at the right moments, such as when we visited the monastery in Estella and during lunch at Santa Cruz. 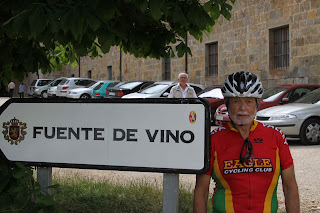 The first major stop was the Monastery of Irache, a 12th century Benedictine Abbey.. Before visiting the monastery, we had to stop at the famous "Fuente de vino," the fountain which dispenses wine (courtesy of a local vintner) instead of water -- "to provide strength to the pilgrims for their journey. [We have now entered the famous Rioja wine district of Spain.] We then spent some time touring the impressive monastery and adjoing cloisters.

We stopped for lunch at Santa Cruz and ate light since we had the long climb ahead of us. We bellied up to the bar, ordered one or two tapas apiece as well as something to drink, and then took the food outside to relax for a few minutes.

After the aforementioned climb, we had a magnificent descent on a beautifully paved rode with no traffic and superb vistas. Another short climb brought us to the town of Laguardia in the hear of the Rioja Alavesa wine region. We were treated to a special winery tour of the Bodega Carlos San Pedro. Our host provided a most informative presentation. The town of Laguardia has 300 caves all designed for wine storage -- practically one under every house.Most of our tour was in the cave.

Our hotel is in a "castle," constructed in 1932 from stones taken from a much older castle torn down by its rich and eccentric owner (at least, that is how I understand the story). The room are exceptionally well appointed (unlike last night's accommodations which were adequate, but sparse).

Tomorrow will be a shorter ride -- about 29 miles, and relatively flat.
We have five riders (Pat and Larry, Mary Kay and Bob, and I) this week, as well as three guides (Belen, Philipp and Enrico). Next week, we will be joined by four more riders.