Since today’s ride was relatively short, we took our time in the morning. After a leisurely breakfast (see photo in previous post), we took a walk around the walled city of Laguardia. It only takes about 20 minutes to walk the entire perimeter, but the views are impressive in every direction.

It was about 10:30 when we set off at a leisurely pace. Not far into the ride, we found the police operating a sobriety checkpoint. Apparently some of the winery tourists get a very early start. 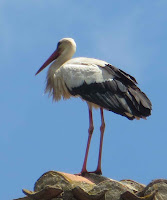 We stopped in the small city of Haro for a leisurely coffee and enjoyed a variety of cookies that Philipp and Enrico had bought the night before in Laguardia. We sat on the terrace at Café Suiza and simply enjoyed the beautiful day. Incidentally, the weather was perfect – sunny, but not hot. At Haro, and then again at a smaller town, I saw storks who nested atop churches. Apparently we will see lots more along the way. (I don’t think that I have ever seen a stork in the wild before.)

From Laguardia to Haro, we were riding primarily through vineyards. The “bodegas” or wineries were of varied and very elaborate architecture. After leaving Haro and crossing the Ebro river, the agriculture was varied, although most of it was wheat fields. Along the way, we spotted several small cities and villages, each clamoring to have its photo taken. 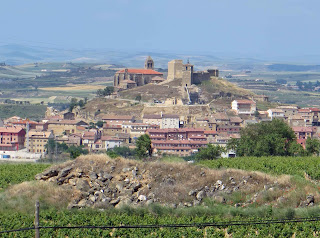 We arrived at tonight’s destination, Santo Domingo de la Calzada, in time for lunch (by Spain’s standards), but I decided to skip it in light of the cookies and coffee in Haro. Around five, I decided that I needed a little ice cream to tide me over until dinner at 8:30 this evening.

Santo Domingo de la Calzada has a famous legend going back to the early 12th century. The following version is taken from our daily ride sheet:

A family of German pilgrims was spending the night in Santo Domingo de la Calzada when the innkeeper’s daughter propositioned their son. The son spurned her and the embittered young woman took revenge by arranging to hide some of the church silver in the young man’s pack. The next day she notified the authorities, who arrested the pilgrim and found the silver. The young man was hanged for theft. When the family returned from Santiago, they stopped in Sto. Domingo to pay their respects to their dead son who was left hanging as a warning against sin. But when they approached his body, they found him alive, exclaiming that St. James saved him from death due to his innocence. The parents ran to tell the mayor that their son was still alive. The mayor, about to enjoy a chicken dinner, scoffed at the news and said the boy was no more alive than the chicken he was about to eat. Naturally, the chicken sprang to life and ran away cackling.

I wonder what we are having for dinner tonight.
Posted by Guy at 6:28 PM