Probably the best day yet. I have to say “probably” because each day has been special with several great moments. But today had it all, with great weather, beautiful scenery, roads that seemed to push the bicycle along, and a very special lunch.

Because it was a short day, we enjoyed a late breakfast and a leisurely pace, mostly along small country roads. Our lunch target was Melide, and we were concerned about arriving too early because yesterday’s extended right took several miles off what would normally be today’s ride. Normally it is hard to find a place serving lunch before noon (often much later). But when we hit Melide shortly after 11, our target, the Pulperia Ezequiel, was open and starting to handle the luncheon rush. 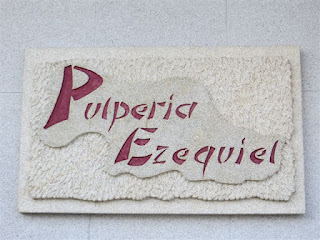 What’s the big attraction, you ask? Octopus! Pulpo is octopus, and pulperia is a restaurant specializing in octopus. Somewhow, all the pilgrims hear about this place, and all find it a “must.” Even those who have never tasted octopus try it and fall in love with the delicious, tender morsels. Trust me, when you are in Melide, you must eat here and try it. 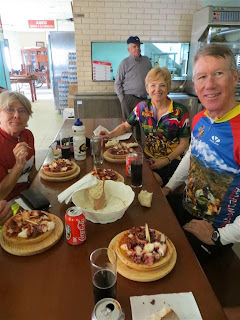 After lunch, we had three short climbs through increasingly rural farm country, until we arrived at our lodging for the evening, a traditional country house (similar to a B&B). This one is a restored manor house from the 16th Century. It has a small chapel (apparently no longer used) which is now being used to store our bikes.

Tomorrow’s ride will be even shorter, and will take us to our final destination – Santiago.
Posted by Guy at 5:27 PM