My apologies for two days without posts -- we did not have WiFi. It is now Wednesday, and I am catching up.

Happy Anniversary Kathleen. Wish you could be here!

No WiFi access here, so this account will be posted tomorrow (or as soon as we do get WiFi).
.
Today’s ride was short (just 24 miles), but dominated by a sustained climb, which brings us into the province of Galicia We gained just over 2000 feet of elevation in the last five miles, which averages out to a 7/5% grade for the whole stretch. Parts were considerably steeper. I think mathematical principles would require that some parts were also less steep, but I don’t remember them.

The weather was changeable, but we had rain more often than not. I wore a full rainsuit most of the time. Just to make it interesting, we also had some wind, although not sustained. Even with the rain, the views were spectacular. I did not get a lot of pictures because (1) the cameras were sheltered from the rain and hard to get to, and (2) I didn’t want to interrupt the climb too often for fear that I might not have the will to start again.

We finished up at O’Cebreiro (elevation approximately 4300 feet), where Spain’s first snowfall of the year is usually reported, often as early as September. With the wind and rain, it is quite chilly. There are fires in the fireplaces and we have heat in our Spartan rooms. The restaurant attached to our lodgings has a delicious “Caldo Gallego,” a hot soup of potatoes and some green leafy vegetable (kale?) – it really hit the spot today. Accompanied by an order of freshly cut french fries I have enough sustenance to hold me until supper.

This small and isolated village is quite charming. It has only 21 residents, but has several small places offering accommodations and meals, as well as two stores with lots of souvenirs for sale. There are several pallozas (mortarless) stone huts with thatched roofs, a style of architecture used by the Celts. A Franciscan monk sits in the small church, interrupting his meditation as need to stamp the passports of the peregrinos. 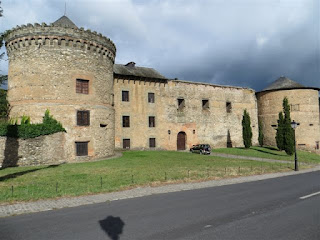 The accompanying pictures capture all of our riders except Edda. Somehow I missed her, but will capture her in a future blog entry. There is also one here of your “typical roadside castle.”
Posted by Guy at 3:32 PM