After yesterday’s tough ride ending in the long climb in the rain, I slept wonderfully, and awoke to – more cold wet weather. I dressed with multiple layers and all of my foul weather gear and set off in the fog. Throughout the day we had a mixture of weather. We had occasional sprinkles, but no real rain; we had fog which made the wet weather gear useful, and (near the end), we had wind. 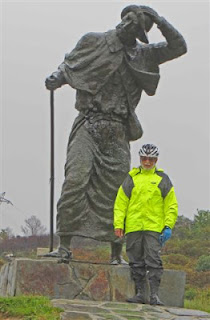 In this first picture taken shortly after leaving O’Cebreiro, I am standing with bronze sculpture of a larger than life pilgrim. Notice the amount of clothing. It was taken for me by a Japanese pilgrim; of course, I took one for her with her camera as well. There is a universal language for “will you take my picture, please?” which needs no words. We use it often.

Today had a lot of climbing – over 4600 feet, but nothing really difficult. Most of it was “rolling,” although tougher than what we usually consider to be “rolling hills” because of the length of both the descents and ascents. The momentum from the downhills doesn’t last long enough to be of much help on the uphills.In fact, in Spanish they call them “rompepiernas,” or “leg breakers.” After a pleasant lunch in Portomarin, we had a sustained climb for about seven miles, but it wasn’t too steep. It was just a matter of grinding it out and hoping that the rain would not return – by now we had shed most of our rain gear and maybe an extra layer as well.

Portomarin would normally have been the end of the day’s ride, but because they were unable to  book hotel rooms there, we continued on to Monterroso which is good for two reasons. First, we have the long climb out of the way, and won’t have it to start with tomorrow. Second, we are staying in a delightful “casa rural” where we are experiencing the true Gallician countryside. This small complex of four buildings used to comprise an entire village. The old buildings have been beautifully restored. On our way in, we had to stop and wait for a small herd of cattle to pass along the side of the road. 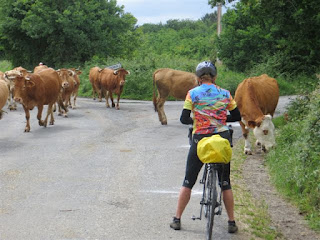 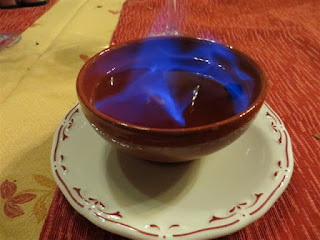 Our Gallician dinner was combined with a birthday party for Larry. It was a festive affair with huge quantities of food. For starters, we had an excellent tortilla (typical Spanish omelet with potatoes), jamón, salad with wonderful fresh tomatoes and lettuce, crusty bread. The next course was an array of grilled vegetables. This was followed by roasted chicken, Gallician style. We then had the typical “tarta de Santiago” (purchased by our guides in Portomarin) as Larry’s birthday cake. This gluten-free cake is made solely from almonds, sugar and eggs. It was excellent. Then we had the planned dessert of  a local flan. Finally, an after dinner “witches brew”which had been flaming on the side board for an hour or so was served (after appropriate ceremonial incantations read by Belen). This consisted of a grappa-like drink in which lemons, oranges and coffee beans had been soaking. The Gallician name for this is  “queimada.” 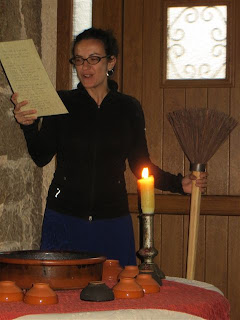 As was the case last night, we do not have WiFi today, so this day’s blog will be posted tomorrow.
Posted by Guy at 3:43 PM