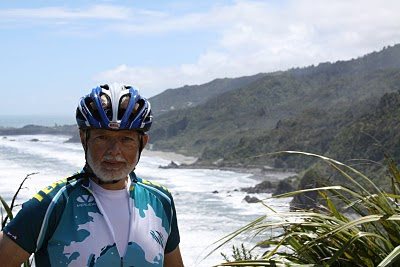 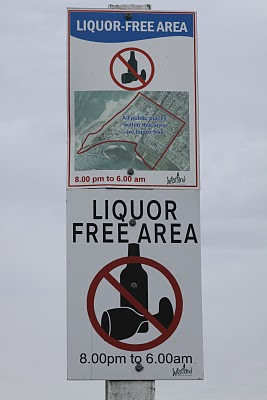 Great ride today. We requested an early breakfast (7am) and I was on the road by 7:45. The weather looked iffy, but it changed from mostly cloudy to mostly sunny as the morning wore on. The ride was about 60 miles, with a few rolling hills at the beginning and a long flat strectch along the coast for the second half (except for the detour -- more later).

I pulled off the main highway in the fairly large town of Greymouth and stopped for a midmorning coffee at Cafe 124. I expected to see others from our group, but apparently most of them just stayed on the main route. Too bad, because this was the best cup of coffee that I have had in several days. Most of us Americans have had difficulty figuring out how to order coffee that is reasonably similar to what we have been used to. The best solution seems to be a "long black" which is closer to espresso than to American coffee and quite good (and comes in a decent sized serving).

About fifteen miles from Hokitika, we had the option of taking a "scenic detour." This was a welcome break from the fairly heavy traffic on Route 6. The detour was along barely traveled farm roads and went inland for about 3 miles, then paralleled the coast, and then went back to the coast emerging right at our hotel. this did have a few hills, but again not much. At one point, I came to a fork in the road and was pretty sure that I needed to take the uphill branch, but I asked a local resident who was in her front yard, "Which way to Hokitika?" She pointed to the uphill road and said, "Good luck. It is a bit of a hill." I was a little concerned, but it all turned out to be a matter of perception. The hill was negligible. (Total ascent for the day was barely 2000 feet, according to my Garmin.)

Hokitika is a very interesting town. It is the center of the Westland jewelry, with dozens of shops selling jewelry made of the local jade, and the "New Zealand Ruby Stone" which is unique to this area. It also has a sock museum with the world's largest collection of sock knitting machines (and where you can buy socks made of possum fur if you are so inclined).
Posted by Guy at 3:18 AM