Last night, shortly after we docked at Schoonhaven (and after we had passed through the large lock), it started to rain. This didn't bother us as we had a delicious salmon dinner on board. After dinner it had stopped raining, and we took a walk through the town of Schoonhaven, which seemed extremely quiet for a Saturday evening.

We woke up this morning  to a very overcast day, had a hearty breakfast on board and set off for today's 33 mile ride. This is still agricultural land, with lots of small farms and many beautiful homes along the waterways. First stop was Gouda, with an extremely interesting town hall, dating back to 1603. Absolutely no sun, so the pictures are kind of flat. 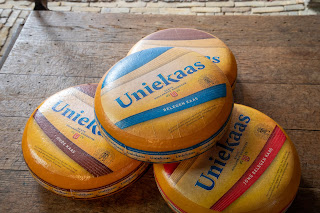 As I left the town of Gouda, it started to rain gently, I ignored it for a while, but it got to be just steady enough that I pulled out my rain jacket which I kept up for the rest of the ride. We continued on through some wetlands and saw lots of interesting water birds. The day was a mix of bike paths and narrow country lanes. Perhaps because it is Sunday there was very little motor vehicle traffic, although I saw lots of cyclists, including some club rides that were moving at a very good pace. Contrast this with the family four, dressed in their Sunday best, biking together to church.  I later learned that this region of Holland is known as the "Bible Belt," a term that I thought was unique to the U.S.

Shortly before our next stop of interest, Kinderdijk, I caught up with Bert who was marking our ride with chalk arrows. He had stopped marking for a while so that the rain would not wash out the arrows to quickly. We cycled together into Kinderdijk, taking a ferry at one point to cross the Lek river.. The rain stopped just before we got to Kinderdijk, a UNESCO World Heritage Site with 19 majestic windmills. I stopped for a hot dog (not very good) and several pictures, while Bert continued on marking the route. 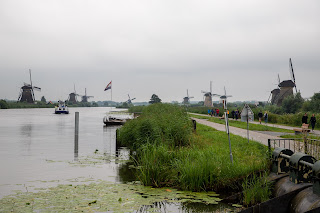 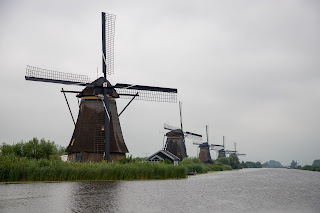 After leaving Kinderdijk, I continued on to our destination, Dordrecht. along the way, I met up with Bert again, waiting for out second ferry of the day. We took the ferry across the Beneden Merwede River and pedaled together to the boat.

As I type this blog, several of the group are heading to the Jacuzzi at the back of the boar. I had not expected that amenity and did not bring a bathing suit. (Of course, I can improvise as I did in Cuba when we snorkeled the Bay of Pigs -- bike shorts can have more than one purpose._