You couldn't ask for a better day for cycling -- the sun has been out all day, the temperatures have been pleasant, and the scenery beautiful. So, I will start with the video of today's ride: https://www.relive.cc/view/gh38148924128.

We started off with a two hour breakfast cruise as our floating hotel traveled from Dordrecht to Willemstad. We then set off for an easy day of cycling through beautiful country with more windmills and lots of green countryside. Along the way we saw potato fields and pear orchards. 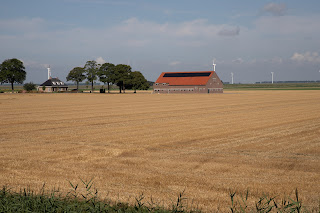 Cycling in the Netherlands is like cycling in Florida, as I have heard it described by my Floridian friends -- the only hills are the overpasses. This is  a very bicycle friendly country. Although I knew that there is a huge network of bike paths and dedicated bike lanes, I did not realize until yesterday that many of these are numbered routes with good signage, so that you could easily plan your tip nd just follow the signs. 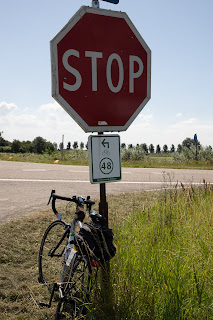 At one point today, we had to cross a canal via a self-operated bridge. The normal state of the bridge is "open" so that watercraft can pass through. When pedestrians and cyclist wish to cross, they push a button to activate the bridge and, after a suitable interval to allow the boats to clear, the bridge slides across the canal.
The highlight of the day was the small village of Oud-Vossemeer. It is believed (or claimed) that the ancestors of Franklin D. Roosevelt came from this town. There is a delightful inn on the town square named Huys van Roosevelt, which is filled with Roosevelt memorabilia. The draft beer is "Roosevelt bier," and there is even a Roosevelt museum across the square from the Inn. Most of us had lunch at the outdoor tables.  The proprietor spoke excellent English (which was good since the menu was all in Dutch.)

From Oud-Vossemeer it was a very short bike ride to the location in Tholen where the barge is docked. In the village I saw the prettiest windmill so far on this trip. There is another one in town which we will visit tonight after dinner.