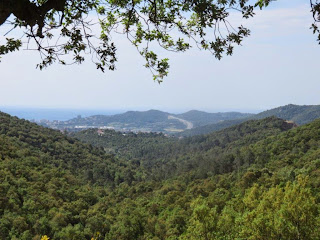 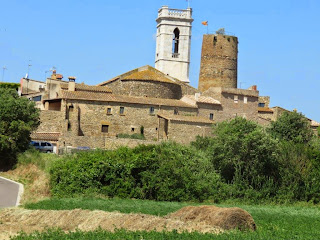 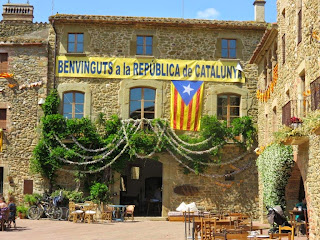 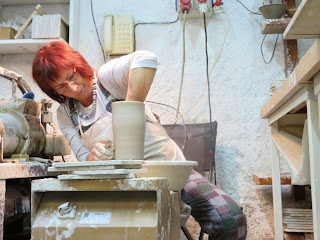 Another great day in Spain as we cycled 43 miles, incorporating a
visit to a pottery workshop, an out and back climb to add a little variety
to an otherwise flat ride, a leisurely lunch on a pleasant patio, and a
detour to some Iberian ruins dating back to the sixth century BC. We were
riding through a region known as Baix Emporda, an area famous for its
several medieval towns, most of them very well kept.

Early in the ride we made out stop at the pottery workshop in la Bisbal,
where we had a demonstration of the artist's techniques. Following this, we
deviated from our loop ride and did a climb off about 500 feet elevation. It
was not steep and quite easy, and apparently we violated a basic rule of
nature -- we had a tail wind going up and a head wind coming down! At the
top, there was a brief view of the city.

After the descent, we cotinued on, stopping at several small medieval towns
for pictures, and ultimately stopping for lunch in Fontanilles at a pleasant
restaurant on a hillside which offered outside tables with a nice view. I
started with a green salad (excellent) and then had the traditional Catalan
dish of a grilled local variety of sausage and white beans. It was quite
tasty and provided fuel for the afternoon's riding. Although we ride fairly
independently, sevwn of us regrouped at this lunch spot which made it all
the more enjoyable.

The highlight of the afternoon was a slight detour to the fascinating
arechaelogical site about a mile from the village of Ullastret. This
pre-Roman site was occupied continuously from the sixth cenntury BC until
about 1700, when it was mysteriously abandoned. The ruins are in excellent
condition and demonstrate a remarkably advanced civilization. They had a
special "severed heads" exhibition based on the recent discovery of some
ancient human skulls with long nails driven through them. Apparently the
heads were taken as trophies after a successful battle and then nailed to
the wall to "send a message."

I got back to the hotel around five and had a very welcome shower before
settling down to write this note. We have our evening briefing in about half
an hour, and then are on our own for dinner tonight.

I'll close with a brief mention of last night's dinner. After our olive oil
tasting we were served dinner in a private dining room. It was another
extravaganza, with many starter dishes for sharing (including quail eggs,
duck ham, snails and other every day delicacies). The main course choices
were squid or grilled rabbit. I had the rabbit which was a little over done,
but still tasty, and had a taste of the squid which was excellent.

Time to wrap this up and head for the briefing about tomorrow's ride.
Posted by Guy at 7:07 PM