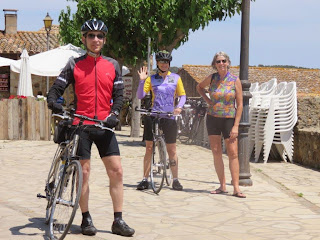 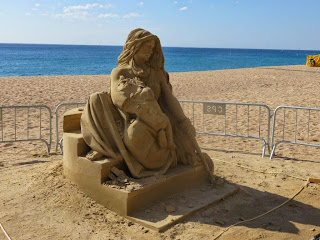 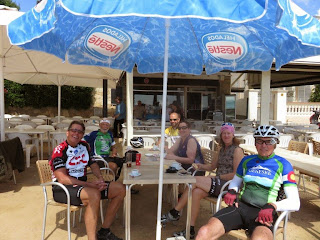 It is hard to believe that it is Saturday already. Today was our
second full day of riding, and it was very different from yesterday. It was
only 25 miles in total, but we had strong "breezes" as we turned inland from
the coast. So, there was plenty of opportunity to stop for coffee, gelato,
photos and lunch.

We left our hotel and followed along the beach, riding for much of the time
on the "boardwalk," which, for the most part was a paved surface rather than
wood. Because we were comparatively early, there were few beachgoers and the
route was easy to navigate. The first major beach that we passed had a sand
sculpture contest in progress. It must have been going on for a few days
because most of the sculptures were begininning to detriorate. Still, they
had been very well executed. The all faced away from the water, so the sun
was behind them and it was difficult to get any good pictures.

Just before leaving the beach and heading inland, we stopped for coffee at a
pleasant little bar right on the water. Then we headed inland, riding for a
while on hard-packed trails similar to what we had yesterday. We passed
through several sall towns, inclluding Palafrugelll where it was market day
and there were lots of fruits, vegetables, meat and fish on display. I had
a quick waltk-through, bought a gelato (quite inferior) and then pedaled on
to the small medieval town of Pals, where I joined Lee and Carolyn for a
walk through the old city before having a "lucky burger" for lunch. (The
lucky burger is distinguished by the guacamole on it; the "goat burger"
features a generous goat cheese). Not exactly cuisine of the region, but we
have had, and will continue to have, lots of that.

The last 7 kilometers brought us to Peratallada,, where we will be for two
nights. Although it was cold, I did take a quick dip in the pool. I still
hope to get in the Mediterranean later in the week, but it just looked too
cold yesterday.

Tonight we have an olive oil tasting before dinner. We have WiFi here, but
the signal is very week, so I am hoping that this will post properly.
Posted by Guy at 6:27 PM