Our boat arrived in Bruges yesterday afternoon, and we were free to walk around the City prior to returning for a farewell dinner on board (farewell to those who are leaving the tour at this point.) As planned, I visited the Groeninge Museum and saw two paintings that I was particularly drawn to. In addition to the Judgment of Cambyses, mentioned yesterday, there is a triptych of the Last Jusdgment by Heironymous Bosch.

After that, I looked in vain for an ATM. This City is absolutely clogged with visitors (9 million per year) and yet it seems impossible to find an ATM. I was told this morning that they can only be found in banks and a few hotels. So this  morning, our guides pointed one out to me. The farewell dinner on board was excellent -- cod with potatoes prepared in a very interesting and tasty fashion as well as fresh green beans.

This morning we took leave of the boat and our excellent crew.

The computer does not seem to like me tonight, and the WiFi is sluggish, so I will add all the pictures at the end.

Our guide for the walking tour of the City this morning was Ian -- extremely knowledgable and an excellent communicator. I wish that I could remember 5% of all that he told us.

After the tour, we walked as a group to the hotel where the six of us who are continuing onward are staying, along with our two remaining guides. We were on our own again for a few hours, so I had a delicious lunch of mussels (a Belgian specialty) and frites. The portions were immense, so I did not finish them. I then visited the Saint John's Hospital museum. This hospital is the oldest hospital in Europe still standing (although it has not been operated as a hospital for many years -- it is now a museum). Ian had said that if you were only going to visit one Museum in Bruges, this was the one to see. It was quite informative. Like the other museums that I have visited on this tour, the audio guides in English are very helpful.

I went back to the hotel to check in. My room is palatial compared to the small (but pleasant) cabin on the boat. Since we are back on the bikes tomorrow, I am trying to unpack as little as possible.

We met later in the afternoon for a guided tour of the Half Moon brewery. It is the only remaining brewery in Bruges. It was completely modernized in 2010, and they build a two mile pipeline to take the beer to their bottling plant outside the City. This eliminated a huge amount of truck traffic in this small city with its narrow streets. Our guide was tremendous -- she could have a career in stand-up comedy. We finished the tour with a glass of their beer -- unfiltered. This is the only place you can get it unfiltered -- the beer that is bottle is filtered along the way. We shared some bread and cheese with our beer. After my big lunch, that was enough food so that I skipped dinner. 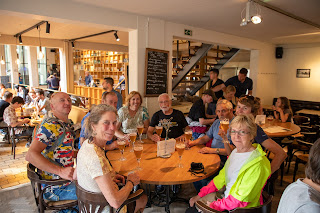 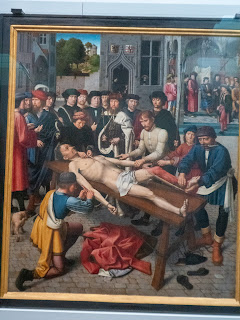 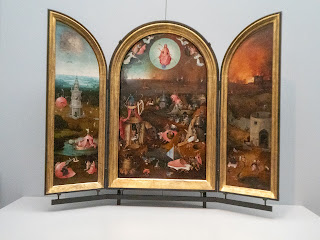 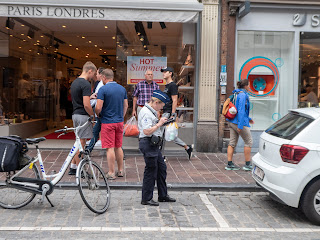