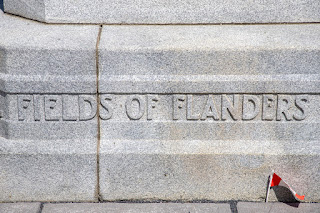 Today was our last day of cycling. It was a loop of 45 miles through the Fields of Flanders, with lots of WWI memorials, monuments and cemeteries, of which I shall say more in a few moments. It was scheduled to be a 39 mile ride, but, because Becky, John and I missed an arrow and went about three miles before backtracking we got six miles of "extra credit." Because it was a loop ride, we had our share of both headwinds and tailwinds. As usual, we had a mixture of smooth roads and rough cobbles. We also had our first real hills today -- not too long or too steep, however.

More than half a million Allied and German soldiers died in three major battles between 1914 and 1917 in this region which includes Ypres. The first major stop was the Memorial Museum Passchendaele 1917. The museum with its audio guide was very informative. (Did you know that the first defense against the chlorine gas used by the Germans was a urine-soaked handkerchief which would trap/neutralize the chlorine if placed over the nose? Gas masks were developed shortly after.) 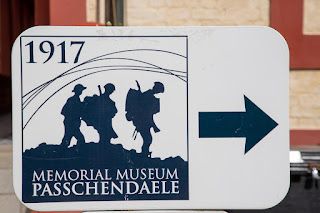 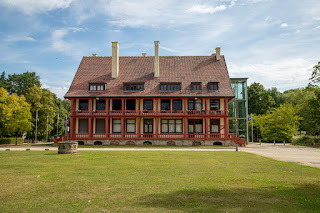 Becky, John and I had some snacks there, which served as lunch, before getting back on the road. My next stop was "Hill 62" which was not very high, but which offered a commanding view of the surrounding fields and is the site of the monument pictured at the top of the page. 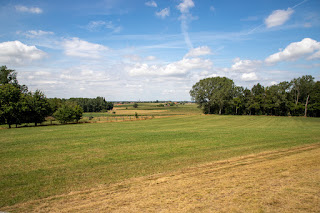 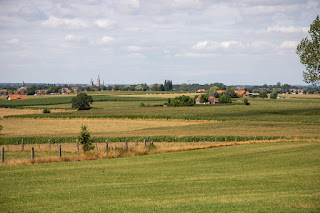 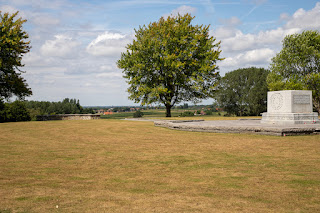 We then passed several cemeteries. Each on contained the remains of the fallen from a particular regiment or similar unit. They are immaculately maintained by the home countries of those buried in each cemetery. 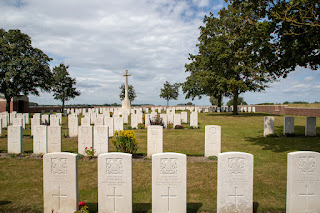 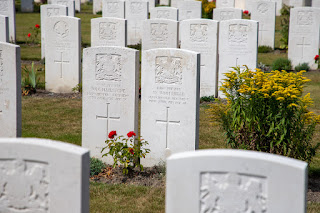 One thing that has surprised me on this whole trip is how few poppies I have seen. During WWI, the fields of Flanders were said to be "ablaze" with the red poppies.

If you view the video of today's ride, you will immediately see our wrong turn -- and out and back into the middle of the loop. https://www.relive.cc/view/r10007150964

Many of the narrow streets that we have been riding on are one-way. However, in almost all cases, bicycles are permitted to ride counter to the flow of motorized traffic, as indicated by the signs (the one sign that I can "read").

Tonight we will have our farewell dinner and tomorrow morning we will say goodbye to our guides and be transported to Brussels by taxi. I will have an afternoon and evening in Brussels and then catch my plane home on Wednesday morning.

I will close with two pictures from the square in Pomeringe where we had dinner last night, and will have dinner tonight as well. 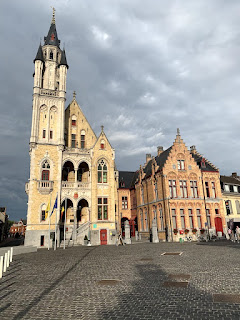 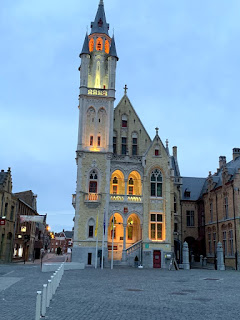