Today was our penultimate day of cycling. It was absolutely perfect weather as we cycled through 48 miles of Belgium. The day had two highlights. The first was a visit to the "Trench of Death," trenches remaining from the World War I Battle of the Yser. It was extremely moving to see these trenches, with the original sandbags, in which the Belgian soldiers lived for four years. 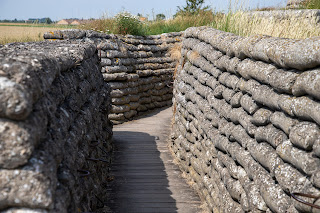 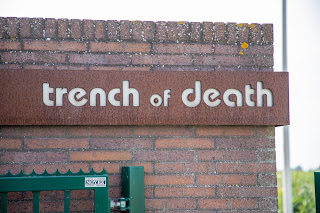 Along the way, we stopped for coffee. Here is Jeanne with her capuccino. 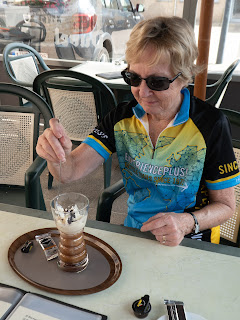 Since we are down to six riders, we tended to stay closely grouped. Today was the longest day of the tour -- just under fifty miles, and almost completely flat (500 feet of climbing in fifty miles is hardly noticeable). The weather was great, with very little wind. The road surface was quite variable, from smooth-as-silk asphalt to concrete slabs with the annoying seams, to brick roads that resembled cobblestones.

We pedaled on to the second highlight of the day -- the Abbey of St. Sixtus, one of the six Trappist Monastaries in Belgium still brewing beer. (There are a total of fourteen in the world.). To be a Trappist beer, it must be brewed entirely within the confines of the monastery. This particular monastery sells its beer only on the premises -- you can not buy it anywhere else (unlike Chimay, for instance, which is readily available in the US). I tried the strongest of the three (regularly judged to be one of the best beers in the world). Fortunately we only had a couple of miles to our hotel.

I don't have any great pictures from St. Sixtus, so here are photos of John and Becky on the tandem, and Bob and Jeanne on their machines. 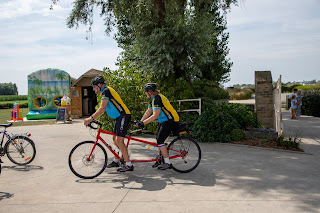 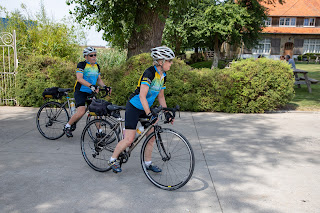 Our hotel is fascinating. It is spread out over several buildings in this rather old town of Pomeringe, and the rooms are ultra-modern. My shower is fantastic, with several horizontal sprays as well as the standard overhead shower. The bathtub, which I did not use, has about 20 water jets. Even the lighting is unusual -- the overhead lights keep changing colors as I type this.

The six of us went out as a group for dinner tonight. Service was rather slow, but the food was excellent, and we shared several dishes.

Tomorrow will be our last ride -- it will take us through several WWI battlefields. It will be a loop ride, bringing us back to the same hotel.
Posted by Guy at 10:19 PM