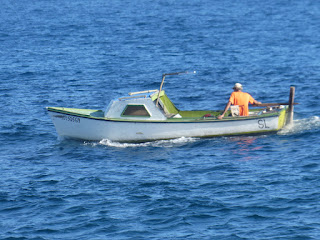 The Hotel Presidente offers a huge selection at the breakfast buffet, but you have to choose carefully. They have overcooked fried eggs, undercooked bacon, hard and dry pastries, and the terrible bread that seems universal in Cuba. On the other hand, there was a good selection of cold meats and cheeses, smoked salmon, lots of fruit and juices, etc.

After breakfast, I walked along the Malecón (a famous promenade along the harbor sea wall) to Havana Vieja (the old city) and walked up the Prado to Parque Central. The Prado is a pedestrian mall, several blocks long, with lots of street vendors selling their artwork. I stopped in at the Parque Central hotel to see how it compared with my recollection. If anything, it seemed to have been upgraded with a bustling lobby with some high-end stores. Using my minimalist Spanish, I chatted with a doorman, telling him that I had stayed there fifteen years ago. He asked where I was staying now, and I told him. He asked which hotel I liked better. No contest – the Parque Central is a much nicer hotel [its website proclaims that it is the best in Havana, a claim that I find quire credible.] After using the restroom (my secondary reason for stopping in this familiar venue), I resumed my stroll through Havana Vieja.
I walked down to the Cathedral and stopped for a crepe and coffee at an outdoor café. A little further on I came to the Floridita (a reputed favorite of Hemingway and “the cradle of the daiquiri”). I went in for the obligatory drink and was amazed at the wall-to-wall crush of people. Fifteen years ago, I walked in to the same bar and there were only a half dozen patrons.

As I walked through some of the side streets, I was surprised to see people drawing buckets of water from tank trucks parked in the street – apparently, they do not have running water in the homes. There was even one tank truck delivering water to a restaurant via a fire hose. After taking a few more photos, I tookeone of the three-wheeled “Coco taxis” back to the Presidente where I had a lousy hamburger on the patio. 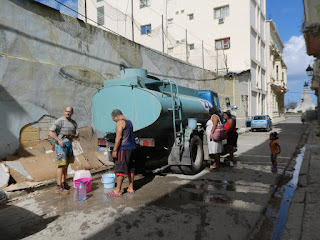 My laundry was delivered and cost $15 – not bad. Lisa had warned me that one person on an earlier tour had been charged $50.

We met at 6 pm to meet the four new riders who will be with us for the second week, and to say goodbye to the eight who will be leaving us. After a welcome drink, we all walked to a nearby paella restaurant. There was a choice of meat, mixed meat and seafood, or vegetable paella. We had preordered because the paellas take considerable time to prepare. They brought out a huge mixed paella and a smaller vegetable paella. It was a very pleasant meal. We then walked the short distance back to the hotel.

Once again, we had the large buffet breakfast at the Presidente, prior to setting off in our bus, to shuttle out of the city. This week we will be in Western Cuba. We drove through Miramar, a section of the city with many upscale houses, embassies and hotels. We passed “Zero Zone,” a large fenced compound where the Castro family lives.

We cycled toward Las Terrazas a community within the UNESCO nature reserve of the Sierra del Rosario Biosphere. After a brief P2P talk about the history of this preserve, we cycled a short distance to the small community of homes located in this park area. It was supposed to be a very upscale community catering to professionals, but it appeared to be rather run down. Within the community we stopped for coffee, getting our first real taste of the excellent Cuban coffee, as we are now in coffee farming country. Then back on the bikes for an excellent outdoor lunch.

After lunch we had more cycling, including the major hills of this tour. Alex dubbed the climb, “the wall.” Several of us tried it; a few others chose to board the bus. My cycling computer app (Strava) says that the climb was 1.3 miles long, averaging 8% grade. But this is misleading, since there is actually a dip in the middle between the two segments of the climb. As I look more closely at the elevation profile, I see that the climb exceeds 18% in a couple of places. I had to walk the last portion of the climb.

The reward for any long climb is usually a good descent on the backside. That was the case here with the bonus of good pavement so it was a real pleasure.

We are staying tonight in a resort with individual bungalows, surrounding a large pool and bar complex. The room is adequate, if basic. Surprisingly, my room has a mix of 110 and 220 volt outlets – most of our hotels so far have had one or the other, but not both.

Right around dusk, we lost electricity. Hoping that it would soon be restored, we boarded the bus and headed for the paladar where we were to dine. The power was still out, but our long outdoor table was illuminated by the headlights of an old Lada. Another group was dining around the corner by candlelight. Fortunately, the lights came on shortly after our arrival, and we had a really good dinner with ropa vieja, great grilled chicken, rice, tomatoes, and cucumbers, followed by dessert and coffee.