Although the cycling is over, we had a day full of planned activities. We started with a visit to the Antonio Nuñez Jimenez Museum. Nuñez Jimenez was a revolutionary who fought under Che Guevarra, and an academic who was a prolific writer, an explorer, and a collector of a wide range of artifacts. The museum was fascinating.

Following the museum visit, we went to lunch as a group. We had good bread for a change. Our appetizers included octopus, ceviche, croquettes, eggplant and fried plantains filled with cheese. We had a choice of several grilled entrees – I had the excellent pork chops. Others had sea bass which they said was also delicious. 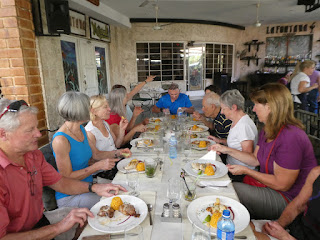 We were on our own for the afternoon, and then regrouped around five for a reprise of the vintage car ride through Havana (for the benefit of the cyclists who joined us the second week). We took a different route this time, so we saw different parts of the city.  The car that I was in was a yellow 1958 Pontiac that had been featured (so the owner told us) in the Hemingway movie, “Papa.” He played early Beatles music on the car stereo as we cruised the city. 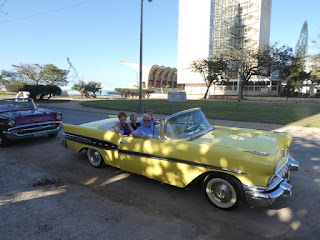 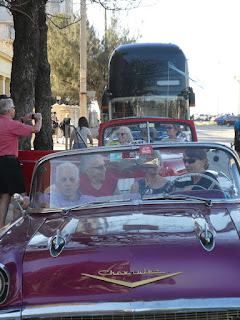 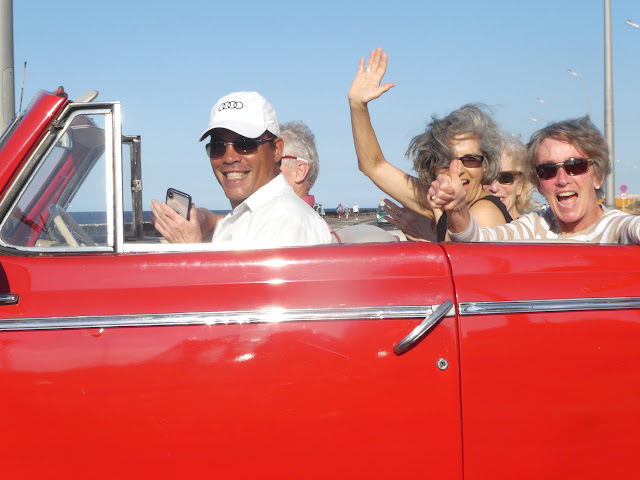 We then walked through a portion of Havana Vieja to a small restaurant where we had our farewell dinner. Unexpectedly, our waiter was wearing winter gloves and sporting a rather obscene t-shirt.

Back to the hotel for a final drink on the veranda where we listened to a small but energetic group of musicians playing as some of the patrons danced. Even our waitress got into the act, dancing to the tables while balancing drinks, and then joining the band with some form of percussion instrument (a gourd?) that I did not recognize.

I spent the morning with a leisurely breakfast, packing, and a final email check before riding to the airport in a taxi with Nancy and Aylan. Check-in was orderly and quick; security much less so. I exchanged my remaining CUCs for Euros and waited for the plane. I noticed that a flight to New York, scheduled to leave about the same time as our flight to Charlotte, was cancelled. I hope that it did not affect any of our group who were heading to or through New York. Two uneventful flights brought me to San Francisco just aft 11 pm, so it was early Monday when I walked in the front door.

In 10 days of cycling, I pedaled 300 miles, seeing all the variety that central and western Cuba has to offer. The trip was full of surprises, shared with a fantastic group of guides and fellow cyclists, and one to be remembered fondly for a long time.

Awaiting me upon my arrival at home was a copy of Liza Gershman’s new book “Cuban Flavor – Exploring the Island’s Unique Places, People, and Cuisine.” I am looking forward to perusing this book given to me by my daughter-in-law, and friend of the author, Carol Morganstern Cunningham. 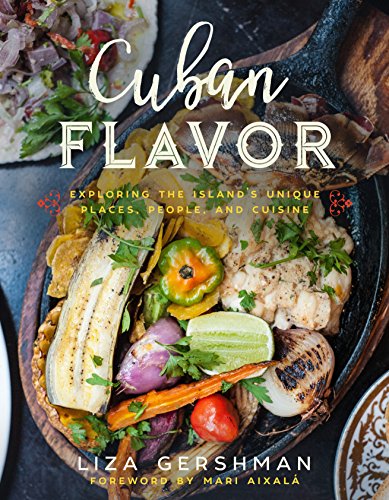