It is now after 11 pm and we have another day of cycling tomorrow, so I will be brief even though this was a full and interesting day.

What made it interesting, on top of all the majestic scenery and some good climbing, was the convoluted process of leaving Argentina and entering Chile. We had to proceed as a group, which meant that those who arrived at the check points first had to wait for the rest. The first check point was for leaving Argentina. The customs people dutifully recorded the serial number of every bicycle, so that Experience Plus could bring them back into Argentina without paying tax. The rest of the process was pretty straightforward, but we were there almost an hour in total. We then had 25 miles to go before formally entering Chile.

Those 25 miles consisted of a good climb (to about 4000 feet) where the actual international border is and where we had another good lunch. This was followed by a great descent down to the Chilean entry point. Apparently the reason for the “no man’s land” in the middle is that there is a lot of snow on the peak in the winter, so they put the border control at lower elevations. It took us almost two hours to get through the entry process. Again, we had to go through as a group, and they inspected every piece of baggage (mostly by x-ray for us, although they did thorough hand searches of individual autos) and hand searched all of our bicycle packs.

After that it was a pleasant ride through lush Chilean country side to the thermal spas of Puyehue, where we are spending the night. This is a very posh resort – a relaxing visit to the thermal pools was a nice way to top off a day of cycling that included about 55 miles with about 4300 feet of climbing, including a sustained 1 mile climb at about 6 and ½ percent grade near the end.
Due to photographer error, some of my “great shots” are terribly overexposed. Nonetheless, here are two photos that did come out ok. (I am using two cameras, which provides some measure of insurance.) 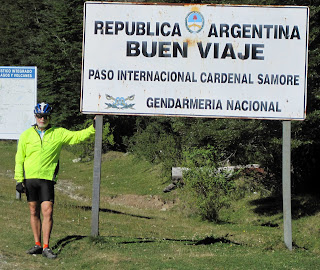 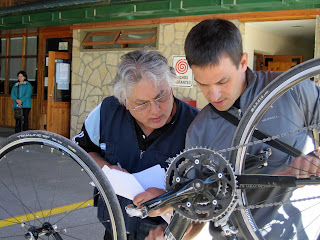