To the Pacific (and we're still East of Florida!)

Today started out a little chilly (no pun intended) but remained sunny up until lunch time when it started to cloud over. We felt a few sprinkles but never had real rain. We did about 35 miles total for the day, as well as two long walks in the National Park in the afternoon.


Our hotel is one of the many "palafitos" in Castro -- stilt houses. These houses, hostels and other buildings along the water's edge are built on stilts (at the rear) because of the tides coming in and out. The front of the buildings are at street level. My room is on the back, or stilt side, of the hotel. I don't have a picture of it yet, but here is a photo of some other palafitos.
Leaving the hotel, we had a few modest climbs and then left the main highway for a stop in the town of Chonchi where we visited the famous old church, which is built entirely of wood. Then it was back on the bikes. Shortly afterwards, we turned off onto a less traveled road, heading toward the Chiloe National Park. This was very rural farm country and very scenic. We had some fine views of Lake Huillinco which was "flat ass calm" (a term of art from Nova Scotia) and acted as a perfect mirror. 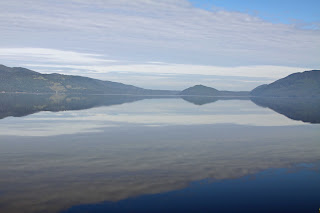 We continued on to a cluster of homes of about 30 families of the people indigenous to the island of Chiloe. At one of them we had a picnic of their typical food, which included sea bass empanadas, cheese empanadas, a delicious bread, and a pancake-like combination of potato and pork. We also had some delicious freshly squeezed juices. Four year old Matthias (son of our hostess) loved to pose for pictures.

After lunch, we had only five miles or so until we hit the national park. The bikes went into the van, and we were led on a fascinating walk through the rain forest by our Chiloe guide, Juan Pablo. An agronomist by training, he is very knowledgeable and told us a great deal about the many plants we saw. One of these was a giant rhubarb-like plant. They do eat the stalk, as we do with rhubarb, but as a salad or appetizer ingredient, somewhat like celery.

﻿﻿﻿﻿ ﻿﻿﻿﻿
After that we crossed the road and walked for about half an hour to the Pacific Ocean. It struck me as amazing that we could be viewing the Pacific while two time zones east of the eastern seabord of the US.
﻿﻿
After returning to the van we shuttled back to the hotel. Then, following a welcome hot shower, we went into Castro for some quick shopping and a dinner at a restaurant on the water. I had another "curanto" (see yesterday's blog), prepared in a kitchen instead of a fire pit. This one had mussels that were far and away the largest that I had ever seen. The verdict -- good, but not as good as the one last night.
Posted by Guy at 2:47 AM