Today was the first day of perfect weather, all day. It was great in Buenos Aires when I got started and it has been great since I arrived in Bariloche. The forecast is for more of the same for several days. If we had to have rain, I would prefer to have it in Buenos Aires than after we start cycling. (Of course, we could still get some later in the trip.)
I left the hotel earlier than necessary -- it turns out that the trip to the airport for domestic flights is only about ten minutes, and the lines were not bad. So, I had plenty of extra time, but that is much better than missing a flight.
The flight to Bariloche was just over two hours and was uneventful. After a brief taxi ride to the Hotel Edelweiss, I unpacked and took a leisurely stroll through the town. It is a very interesting town -- in the winter it is the center of a lot of winter sports activity, and in the summer it hosts lots of hiking, campinng and water sports related activities. It is strictly a tourist town, and the town center reflects that, with lots of stores looking for the traveler's dollar. The town fancies itself as modeled after a Swiss alpine village. The first thing I noticed in the town square were a few St. Bernard's (whose owners were photographers who would take your photo with the dog and sell it to you).
The biggest surprise is the number of large and fancy chocolate shops. I counted at least a dozen, with many of them manufacturing chocolate candies on the premises. Several also had quality ice cream counters. (Yes, I had ice cream.)
I got back to the hotel intending to get to this blog, but it took me almost an hour to get the internet connection working. Hopefully it will last long enough for me to get this posted.
The photo below is a picture of the town square. Tomorrow I will be free until the group has our first meeting and a short ride later in the afternoon. 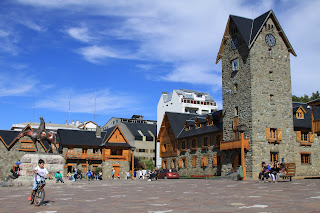