We will land in Madrid in one hour and 13 minutes. By design, I took the “long option,” spending Sunday night in Atlanta. I was able to book the trip with far fewer frequent flyer miles doing this, and got a head start on adjusting to the nine hour time difference.

Atlanta has a new international terminal (it has been open less than a month). To get there, I had to take a shuttle bus from the domestic terminal and then go through security. Only then did I find out (1) it would have been quicker and easier to go through security at the domestic terminal and then move through the airport on the train, and (2) many international flights, including mine, still depart from Concourse E in the "old" domestic terminal.  Since I had lots of time to spare, it all made for an interesting exploration.

Bulletin: We just made landfall over Portugal.

I also got to experience the new flat-bed seats that Delta is installing in its Business Class cabins. They truly do lie flat, although you feel like you are in a cocoon. I think that someone much bigger than I am – either in height or girth – would find them claustrophobic. Nonetheless, I did get some quality sleep. Another helpful feature on both flights so far has been 110 volt outlets at my seat – I have been able to keep my netbook computer plugged in and fully charged.

One minor glitch this morning was waking up and finding only one shoe. The cabin was still dark, and even with the help of a flight attendant with a flashlight, I could not find the missing one. I had visions of having to clear customs wearing my biking shoes which are in my carry on. As she pointed out, however, it could not have gotten off the airplane, and as she predicted, I found it (pushed under the seat) when things got light.

To be continued on terra firma …. 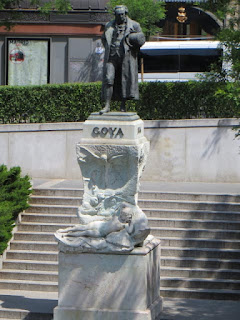 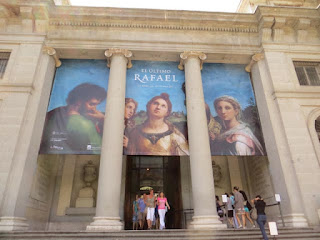 Retrieving my baggage and going through passport control took only a few minutes. I had a pleasant taxi ride to the hotel in beautiful weather. As expected, the room was not ready, so I left my bags at the hotel and started exploring. I soon found myself at the Museo del Prado, which was one of my intended stops anyway,  so I bought a ticket and went in. The Prado is huge and I had no idea where to start, so I headed for the collection of works by Bosch and saw the famous Garden of Earthly Delights. Then I pretty much walked through the rest of the Museum and saw the "masterpieces," which they conveniently highlight for you in the guide brochure. Lots of works by Goya and Rubens. The Museum has excellent signage in English, as well as Spanish.

Then it was back to the hotel where my room was ready. When I made my reservation, they had an interesting promotion -- a room with an iPad for you to use during your stay was about 35Euro cheaper than their standard rate. So I now have an iPad to keep track of for 24 hours.

Time for a little lunch and some more walking before calling it a day.